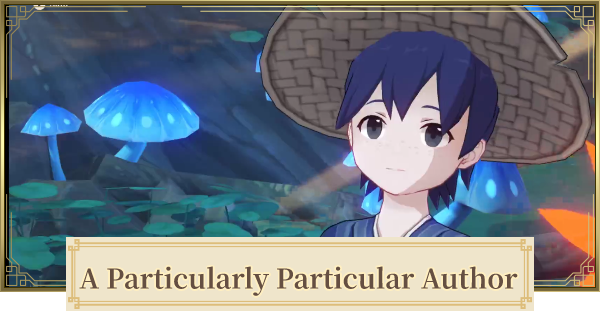 A Particularly Particular Author How To Unlock & Location

Talk To Inazuma Katheryne To Unlock

To unlock the quest, you will need to talk to Katheryne at the Inazuma Adventurer's guild.

To be able to gain access Tsurumi Island and unlock this quest, you must first finish the quest "Seirai Stormchasers".

4. Make Offering To The Perch

After talking to Ruu and his siblings, you will be directed to interact with a tree. After interacting with it, it will release three feathers.

Feather Locations Are Shown In The Mini-Map

For the first set of feathers are just as stated in the mini-map and are easy to spot. Search for 3 feathers and head back to the tree to make an offering.

7. Search For Porches & Unlock Them - Tips

There are three locations covered with Fog that has perches. Tap on each one to get details on how to solve them.

You will be fighting several enemies upon arriving on the porch so prepare for a battle.

This feather will fly away once spotted towards a barrier. Summon an Electrogranum, pass those barriers and continue following the feather.

The second feather is below the cliff where the Porch is. It is close to the porch so it is easy to find.

After fighting wolf enemies, you can find a Hilichurl base filled with defeated hilichurls. On top of it is one of the thunderbird feather.

Upon arriving at Chirai Shrine's porch, there should be a scene. If there are no scene, head to the other side of the tree.

Chirai Shrine's first feather is very close to the porch. Wolf enemies will appear close to it so be careful.

The second feather is protected by hilichurls. There are archers that will also try to hit you that is hidden in the fog so take note of them. It is slightly further away from other feathers.

The third feather for Chirai Island moves a lot. After finding it ride the Thunder gates and follow it until it stops at a ruin.

To obtain the first feather, you must first remove the water surrounding the tree. You can do this by following three Seelies and opening the Exquisite Chest that will appear beside it. Dive down and you will find 3 feathers.

Open the door by rearranging the Relay stones like the photos above. Enter the place to get the second feather.

Sink the water by finding the three seelies and connect the electric puzzle to open the door. Enter the door to get the final feather.

You can also get a secret achievement for finishing this quest.

Replace every instance of "Porch" with "Perch." As in, a perch upon which a bird sits. Otherwise a fine guide