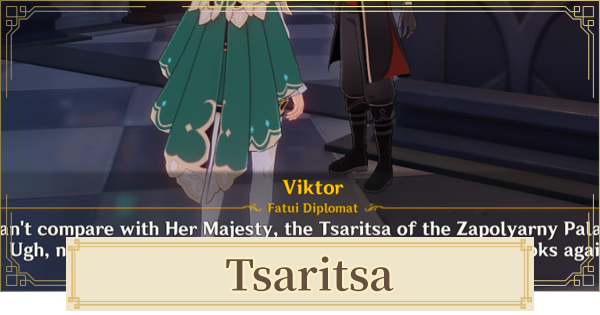 This section will be updated once the Tsaritsa is officially confirmed. Check back again to get more updates!

Tsaritsa, the Cryo Archon and the character that consistently mentioned in the game, however, there is still no information about her release date.

Tsaritsa - Who Is Tsaritsa?

Tsaritsa is the monarch presiding over Snezhnaya and commands the loyalty of the Fatuis. She has appeared in many official movie clips yet not many things are known about her, including her face and true motive.

Tsaritsa is the Cryo archon that's trying to wage war against something of an even higher entity like the Celestia.

While Tartaglia claims Tsaritsa as a "gentle soul" forced to fight for all people, the Shivada Jade Gemstone's description shows that she wants to burn the old world.

Despite what others say, it can't be overlooked that Fatui, under her will is committing questionable acts all over the place.

Appears Near The End Of Teyvat Storyline?

Tsaritsa's story is likely intertwined with the complete reveal of the Genshin story, making her a very late stage character to even show her face. If so, she may be the end of the Teyvat Storyline making her appearance far down the line.

Other Information About Tsaritsa

As all released archons like Venti, Zhongli has been playable characters, there's no reason why Tsaritsa should be excluded from the list. However, due to her prominence in the story, she will probably only arrive with a mega event.

Check Out All Characters Here!

More information will be added soon! Check back again to get more updates!