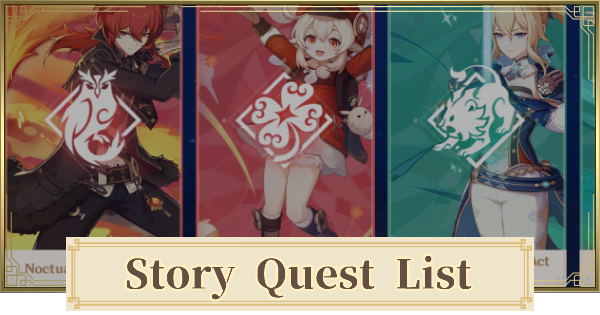 There are rumors going around about possible Story Quests for some characters. Since these didn't come from an official source, it's not guaranteed if they will get a Story Quest or when it would be released.

Story Quests - How To Unlock

Each Story Quest is unlocked with only 1 Story Key. Once you've unlocked it, you will be able to play through its whole story/quest line without needing to unlock anything else.

The only way to earn Story Keys is by completing Daily Commissions. A Story Key is rewarded every time you complete 8 Daily Missions. Make sure to collect the key once it's available.

Check Out The Daily Commission Guide

Does Not Require The Character

Although Story Quests focuses on a character's story, it does not require players to have that specific character. It's actually a good place to try out character since often, you can use them during some sections of the quest.

What Are Story Quests

Story Quests are side quests that focuses on specific characters to develop their characterization further. These are not entirely unrelated to the Main Story of the game since there are instances where they are connected.

Story Quests are a good way to earn a chunk of Primogems since they reward 60 Primogems once you've completed the Quest Line. They also give Level Up Materials and Mora for completing the quests.

Check Out How To Farm For Primogems