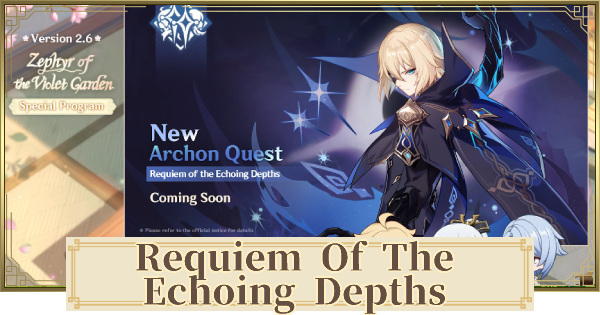 Requiem Of The Echoing Depths - How To Unlock & Overview

An Archon Quest Set In The Chasm

Requiem of the Echoing Depths continues the Traveler's journey as they set upon the dark mysteries of The Chasm. A familiar face will show up as part of the quest and it will reveal new information about Khaenri'ah.

Released In The 2.6 Update

It's been revealed in the 2.6 Livestream that the Requiem of the Echoing Depths will be added to the game in the 2.6 Update.

Genshin Impact follows a linear story line so in order to access this quest, you must complete the previous quests, first.

Dainsleif will make his appearance during the Archon Quest. As his quest to deal with the Abyss Order takes him down the depths of the Chasm, he will work with the Traveler to investigate the secrets of the underground area.

Part I: In the Depths, an Unexpected Reunion

Since the only way you can gain access to the Chasm is by completing World Quests, players must first complete those before they can progress the Archon Quest.

Part II: The Grave Of The Guarder

The Black Serpent Knights spawn in multiples and although they're not that difficult as enemies, having a character with CC does make it easier to deal with them. Kazuha, Sucrose, and Venti are particularly good at this.

Bring An Electro / Pyro On Your Team

The Abyss Herald gains an Electro aura when its health is brought down to a certain point. Using Pyro or Cryo Attacks will easily chip away at the Aura!

Bring A Pyro / Cryo To Your Team

Same as the Abyss Herald, the Abyss Lector gains its own elemental Aura when it's a low health. Since it has an Electro Aura, Pyro and Cryo will deal go damage against it!

Each Charging Device Is Guarded By 2 Abyss Mages

Requiem Of The Echoing Depths - Rewards

Requiem Of The Echoing Depths - Rewards