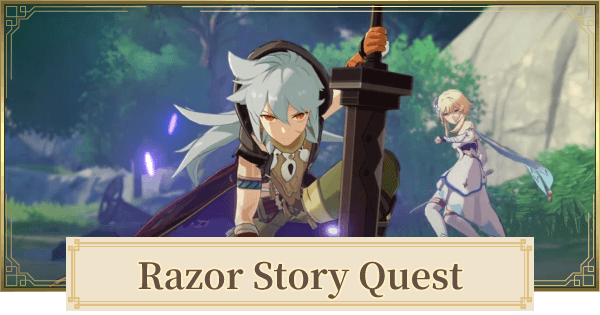 Lupus Minor Chapter: Act 1 - Razor's Story Quest Guide in Genshin Impact. This guide includes how to get the quest and unlock it, a walkthrough, rewards, how to unlock Andrius (World Boss) and his vision story, and more.

The Meaning of Lupical Walkthrough Chart

Another Day as an Outrider! Walkthrough Chart

After completing Razor's Story Quest, you can challenge Lupus Boreas and claim rewards once you succeeded.

Some say he is an orphan raised by wolves. Others say he is a wolf spirit in human form. He is most at home in the wild, fighting with claws and thunder.

To this day the wolf boy can be found prowling the forest, where he and his wolf pack hunt to survive using nothing more than their animal instincts.

The story of how Razor got his Vision is one of the few memories that he wishes he could forget.

One day, during a lightning storm, an Abyss Mage ambushed Razor from behind and dragged him away. The wolf pack ran to his aid and put up a fearless fight, but every last one of them was defeated by the Abyss Mage. As he looked on helplessly at his dear companions being harmed, Razor let out an almighty roar like that of a cornered animal.

Fueled by his almighty fury, a lightning-like power grew inside, and suddenly an overload of elemental energy was flowing within him. He was ready to protect. He was ready to avenge. He threw off his shackles and raised his weapon. The Abyss Mage was overwhelmed and defeated by a wild, unfettered frenzy of Electro energy, but this time it was too late to save Razor's wolven companions. Though he had obtained a Vision, Razor was still unable to manipulate Electro energy with finesse. One day many moons later, when he met the Witch of Purple Rose, Lisa, he began to study human knowledge.

With each day, Razor grew more skilled in the use of his Vision. He made a silent promise to himself: "I will become stronger. I will become the strongest of them all." Because the day may come when his Lupical faces another threat, and this time, he will protect them.

Check Out Razor's Build and Set Up