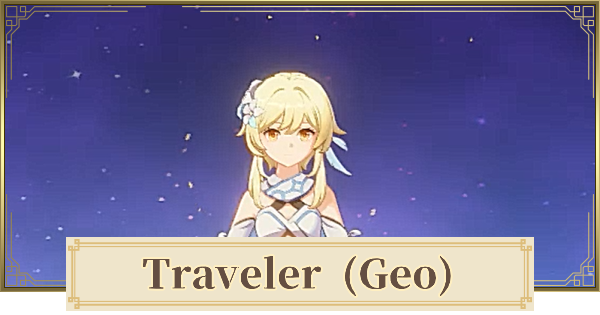 Geo Traveler's abilities can deal powerful Geo DMG & support the team. The abilities also erect Geo construct that can either be an advantage or disadvantage.

While CRIT stats & damage multipliers are the best choices to increase the output damage, it is also good to aim for ER to keep the Burst uptime. You can gain additional 10% CRIT Rate & increased resistance against interruption while inside the radius of Burst Geo construct.

Consistent Passive Is Great Even For Quick Swap

The typical playstyle of Geo Traveler is quick swap where you are just going to use his abilities before switching him out of the field. And in this case, it is great to choose a sword with a consistent passive to deal as much damage as possible.

The effect of Emblem of Severed Fate is focused on Burst. It gives additional Energy Recharge & increases Burst DMG.

Use A Complete Noblesse Oblige If You Want A Buffer

Whenever Traveler uses Burst, the effect of 4-piece Noblesse Oblige gives ATK% buff to everyone in the team. Only use a complete Noblesse Oblige if you want Traveler to be a buffer and if you do not have another character that uses it in the team since the buff does not stack.

Other Characters That Works With Geo Traveler

Since the block that the Traveler summons during their Elemental Skill is a construct, it can be climbed and used as a high ground for your characters. It can be used escape from melee enemy attacks or attack them from the high ground.

Can Be Used For Exploration

The Geo Construct can also be used outside of battle. Characters can climb it to get past obstacles or climb up to higher places.

Should You Get Or Wish For Geo Traveler?

Collect All Geoculus For Constellations

This page should probably be updated Traveler’s best in slot weapon would be between Jade Cutter and Mistsplitter instead of Skyward Blade.

Thanks to Geo traveler's A2 adding Geo dmg at the end of the normal attack combo, you can really make use of the 4pc Husk of Opulent Dreams passive and make a budget Albedo using Cinnabar Spindle.

Talent materials for geo traveler is not 100% corrrect. The material for the elemental burst and skill uses guide to gold, diligence and prosperity (every level of it). The one above is only for normal attack.