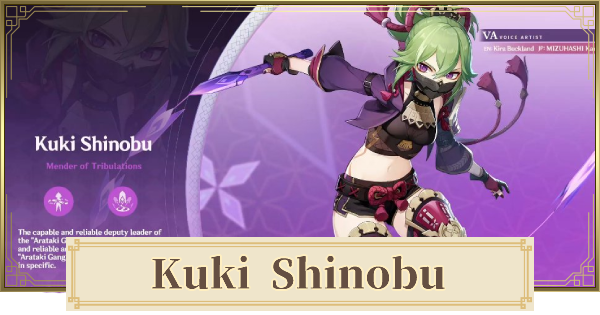 This build focuses on increasing the damage of Hyperblooms that Kuki Shinobu triggers. This is a fairly easy build that provides maximum damage for Kuki Shinobu but with not much healing.

Increase The Elemental Mastery To The Max

Hyperbloom damage is affected by Kuki Shinobu's level, Elemental Mastery and the Dendro resistance of the enemy. To maximize the damage from Hyperblooms, you need to increase EM as much as possible. Aim for at least 800 Elemental Mastery.

This build focuses on increasing the healing of Kuki Shinobu. This works well if using Kuki Shinobu as a support for Superconduct teams and should provide you with sufficient heals to keep the team alive.

Kuki Shinobu's damage and heals scales from HP. When you want to use Kuki Shinobi as healer, you should focus on increasing HP and choose a weapon like one.

If You Have No HP Weapon, Choose A Support Type Of Weapon

Since there are limited HP swords, if you do not have a spare HP weapon choose weapons that can support your team.

Increase Your Elemental Mastery As High As Possible

When using Kuki Shinobu as Hyperbloom Sub-DPS, the only stat that matters is her Elemental Mastery and her level. For artifacts, make sure to choose the pieces that provides the most Elemental Mastery.

To maximize the healing that Kuki Shinobu provides, you must focus on increasing the HP stats of Kuki Shinobu.

Other Characters That Works With Kuki Shinobu

Kuki Shinobu can easily spread Electro in a small AoE around her when that last for 12 second. It will also heal the present member that scales from Kuki Shinobu's Max HP.

The healing of Kuki Shinobu, after Ascension 1, will also scale from EM. With this, you can build Full EM without sacrificing healing.

At lower HP, Kuki Shinobu will produce more powerful heals. Kuki Shinobu can easily be at this state for her Elemental Skill takes 20% of her HP everytime it is used. Make sure to switch character right away to or else Kuki will recover her lost HP.

Elemental Burst of Kuki inflicts Enemies multiple hits of Electro in an AoE. This becomes more powerful when you use it together with other elements such as Hydro and Pyro to produce multiple reactions. The personal damage of this skill also scales from Kuki Shinobu's max HP.

Should You Get Or Wish For Kuki Shinobu?

Pull If You Need Electro Sub-DPS In Hyperbloom Teams

Kuki Shinobu's value boomed after Dendro was introduced. She is able to deal consistent Electro on a fairly wide area that moves with the player. She also has a healing scaling from Elemental Mastery making her an ideal character for Hyperbloom. Pull if you like playing with Bloom reactions.

When using Kuki Shinobu as a healer, constellation 2 would be important. This increase the length of her Elemental Skill for a more consistent heals.

Constellation 4 Will Give More Supporting Damage

With constellation 4, Kuki Shinobu would be an amazing Electro Support because all of your attacks while the ring is activated will deal an additional Electro damage. This will stay even if Kuki is not on the field.

I have her at C3 with her talent at 8, with 4piece Maiden, H. Bonus/HP/HP, Iron Sting. Heals for around 4,900 Hp per tick (and a little over 5,100 Hp when at low health.) Sure her damage isn't great, but I don't use her for that. She applies electro and heals large amounts of HP stupid fast.

please DO NOT build Kuki with full HP stats it's wasting your time, the damage was too low it won't clear anything. use EM build she already has 75% healing effect based on her total EM

The recommended weapons chart says that Primordial Jade increases Elemental Mastery... it does not.

some dendro reactions like aggravate and spread can crit... just focus on em and crit for dendro kuki.

Tbh a lot of the electro character builds need updating due to the dendro update which runs off EM more. For example, Kuki and Yae benefit hugely from the gilded dreams set in aggravate/hyperbloom teams.