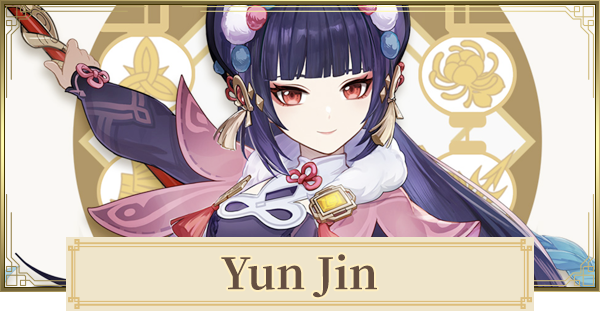 This build will allow Yun Jin to continuously use Elemental Burst. Since she scales off DEF, the artifact set will provide a ton of extra DEF to her.

Yun Jin doesn't have that many options for her weapon since you want her to have an Energy Recharge Weapon. With a high energy cost, you need to have as much as you can.

In order to fully utilize the Favonius Lance, you need to have a good Crit Rate of at least 50%. Use a Crit Rate Circlet for this, but if you're running another weapon, you can simply use a DEF% Circlet.

Other Characters That Work With Yun Jin

Yun Jin is best when in a rainbow comp, but that doesn't mean she can fit in other team comps. Since she buffs Normal Attack DMG, it's best to pair her with a main DPS that focuses more on Normal Attack DMG rather than their skills.

Yun Jin Guide - How To Use Yun Jin?

Yun Jin's Elemental Skill gives her a shield which is effective for negating all damage instances. Her Elemental Skill can be charged in order to further increase the damage its damage.

Because Yun Jin is normally built with high defense, the hold skill can tank powerful attacks with ease even if she has low max HP. Hitting Enemies with her Elemental Skill also releases several energy particles making the skill a great source of energy especially if paired with the Favonius Lance

▲ Increases Normal Attack Of The Team

When characters with the Flying Cloud Flag Formation effect deal Normal Attack DMG to enemies, they will deal bonus DMG based on Yun Jin's current DEF. This effect is great when paired with Normal Attack-Focused DPS Units like Yoimiya and Eula.

The buffs gets increased based on the number of elements in the team. This makes Yun Jin a unique character that gets stronger with more elements present in her team.

Should You Get Or Wish For Yun Jin?

Pull If You Need A Normal Attack Support

Yun Jin is a support that provides normal attack DMG bonus making her a great pair for characters such as Ayato & Yoimiya. She's also great as a Geo support for a Mono Geo support team.

When Yun Jin unleashes her burst at Constellation 2, all nearby party members Normal Attack DMG is increased by 15% for 12s. This adds more damage for Normal Attacks aside from the Flying Cloud Flag Formation effect.

Yun Jin's Constellation 6 will increase the ATK SPD of characters under the Flying Cloud Flag Formation effect by 12%. This helps you get more hits towards opponents using Normal Attacks and increases your damage potential further.

is it good to use her with keqing? (electro)
im trying to build keqing supports and i was wondering if yunjin is good

Who actually wrote this guide? don't use her with itto, I'm begging you. it's not ideal for either of them. and seriously, homa???? over an ER polearm???

Some Yoimiya mains says that c6 Fischl is better support than c6 Xingqiu. Most of the time, Xingqiu is the one vaping rather than Yoimiya's basic attack.

1: She can make Crystallize shields, but yeah, her Elemental Skill doesn't provide any shields, it's just a counter-attack mechanic...

Does her normal attack buff include with charge and plunging attack?