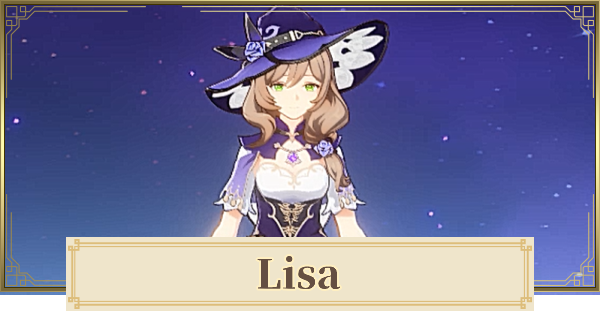 Lisa's powerful burst is great for damaging opponents and spreading electro status. This build focuses on powering up that burst and enabling it to be casted faster and supporting your main DPS using budget friendly items.

Lisa is one of the best Electro applicatior in the game, but she is prone to stagger. Her Burst is strong though it can often work against her than with her.

Perform up to 4 lightning attacks that deal Electro DMG.

Consumes a certain amount of Stamina to deal AoE Electro DMG after a short casting time.

Gathering the might of Electro, Lisa plunges towards the ground from mid-air, damaging all enemies in her path. Deals AoE Electro DMG upon impact with the ground.

Channels the power of lightning to sweep bothersome matters away.

Releases a homing Lightning Orb. On hit, it deals Electro DMG and applies a stack of the Conductive statue (Max 3 stacks) to enemies in a small AoE.

After an extended casting time, calls down lightning from the heavens, dealing massive Electro DMG to all nearby enemies. Deals great amounts of extra damage to enemies based on the number of Shock stacks applied to them, and clears their Conductive status.

Enemies hit by Lightning Rose have their DEF decreased by 15% for 10s.

When Lisa crafts a potion, she has a 20% chance to refund a portion of the crafting materials used.

Lisa's Elemental Burst will hit more opponents at Constellation 4 making her deal more damage both as a support and a sub-DPS.

How To Use Lisa ?

Lisa Elemental Skill will apply a stack on enemies that it hits and is activated for added damage with her Charged Attack. Focus on building stacks first to be able to increase your damage, especially when against multiple enemies.

Use For Continuous Electro Damage

So long as Lisa's Burst is activate, it will zap an enemy to apply Electro to them. Since it's an on-field ability, maximize it by switching to either a Hydro or Pyro character to get Elemental Reactions.

Push Back Enemies From You

Besides applying Electo damage, the Burst will also push back enemies. With this, you can create space for you if you need a bit of breathing space.

Will Work As Either Main Or Sub-DPS

Lisa is a versatile character and her kit will allow her to be built as either a Main or Sub-DPS. She'll work well as either, though as a Main DPS, she'll need to rely on reactions rather than raw Electro power.

Since all of Lisa's attacks apply Electro, she's a great Electro applicator and enabler. Her Burst in particular can be combo with other characters easily since it's an auto-attacking, on-field Burst.

Stacking Takes A Lot Of Set Up

Lisa's stacking system makes it hard for her to deal against multiple enemeis at a time. To compensate for this, she will need to rely on Electro-Charge reactions to spread damage against her enemies.

Burst Can Be Detrimental Without Crowd Control

Since Lisa's Burst pushes back enemies, it can be detrimental since enemies will be misplaced. You can only ever get its full potential when you pair it with a Crowd Control ability that gathers enemies around it.

Lisa Reviews From Other Users

Comment or send your opinions about Lisa in the comments or feedback for a chance to be featured in the article!

What Do You Think Lisa's Tier Is?

The Librarian Of The Knights Of Favonious

Smart, Beautiful, and dangerous, Lisa is the official Librarian of the Knights of the Favonius. Although her job may sound simple, Lisa's no pushover and she does take her job seriously, especially against citizens who do not return their borrowed books on time.

Witch That Studied In Sumeru Academia

Although Lisa resides in Mondstadt now, she used to be a student in the Sumeru Academia and is considered to be the most talented sorceress to study there in the past two centuries.

How Tall Is Lisa?

There is no in-game and official data regarding the height of Lisa. We compared characters and Lisa is Tall comparatively.

How To Get Lisa?

Obtain As A Free Character

Get her for free after completing the Prologue Act 1: The Outlander Who Caught the Wind, however you can still obtain Lisa through the permanent banner and other featured character banners.

lisa and raiden isnt that good? i mean lisa can reduce enemy deff and energy cost is 80

I built her going for pure Elemental Mastery, works wonders. Thundering Fury or Instructor sets, with EM on as many artifacts as possible. Paired with Kokomi Sangonomiya or Xiangling, she can decimate crowds. I use her Burst, Kokomi's skill and then Yanfei's attacks to murder large foes real fast.