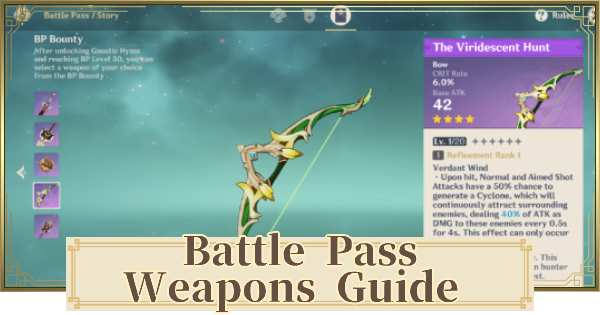 Check out this best BP weapon guide for Genshin Impact. Find out which Battle Pass weapon you should choose, the best choice, tier list, refine, rating, & best weapon to pick!

Which Battle Pass Weapon Should You Choose?

Things To Consider When Choosing

It's difficult to give a blanket rating on these weapons, as ultimately the weapon you choose will depend entirely on what other weapons and characters you already have! Take a close look at your team's needs before making a decision!

Note that if you have a 5★ weapon already, it is almost certainly stronger than these Battle Pass weapons. Choose a weapon which you don't have a 5★ version of!

Before choosing this weapon, head over to Wagner the Blacksmith and make sure there aren't any craftable weapons that are better! These can be obtained with minimal farming and are often of a comparable strength.

How To Refine Battle Pass Weapons

Just like all other weapons, Battle Pass Weapons have the option of being refined to further improve their stats. However, since it's impossible to obtain more than one of these right now, they effectively cannot be refined. If you're considering the ultimate potential of a weapon to include refinement, that would put Battle Pass weapons somewhat lower on the priority scale.

Added To Wishes In The Future?

Although we don't know for certain, given that the refine ability isn't disabled, it's possible that these weapons will be included in wishes later on (after the current Battle Pass season ends).

How To Unlock Battle Pass Weapons

To get the ability to choose one of these 5 weapons, you'll first have to level up your Battle Pass to level 30. There are a variety of ways to do this, and most of them involve doing daily and weekly content in-game. See our guide below for more details.