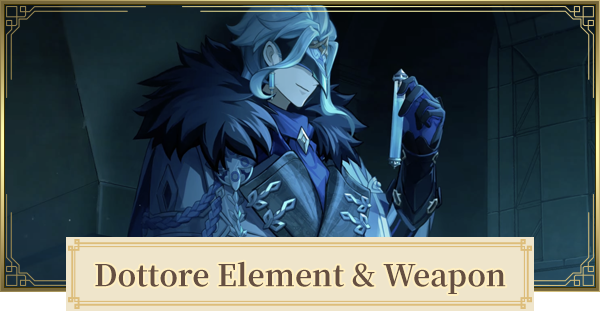 This section will be updated once Dottore is officially confirmed. Check back again to get more updates!

Dottore (The Doctor) is a character that was also introduced in the Teyvat Chapter Storyline trailer, however, there is still no information about his release date.

Dottore (The Doctor) - Who Is Dottore

Note: This section contains some major spoilers in the game.

Appeared On The Official Trailer

Dottore (The Doctor) has finally appeared in the Teyvat Chapter: A Winter Night's Lazzo trailer alongside with the other Fatui Harbingers, attending La Signora's funeral.

Was first introduced in the Genshin Impact Webtoon

In the Genshin Impact Webtoon Chapter 1: Bad Wine (Part 2). Dottore (The Doctor) appeared and was introduced as one of the Fatui Harbingers, similar to Childe.

Will Appear At Sumeru

Dottore was shown having an important role in Sumeru. He is one of the main antagonist that will appear in the nation.

Other Information About Dottore (The Doctor)

Based on the official Genshin Manga, it is confirmed that Dottore is one of the Fatui Harbingers. Just like Childe (Tartaglia), he can be or might be a playable character soon.

This Element section will be updated once Dottore (The Doctor) is officially released.

This Weapon section will be updated once Dottore (The Doctor) is officially released.

Dottore (The Doctor)'s Japanese voice actor was revealed to be Toshihiko Seki.

well, since he hates vision holders and doesnt have one, I don't know if he is going to be a playable character or not.

Anemo, since he has green light on his body.