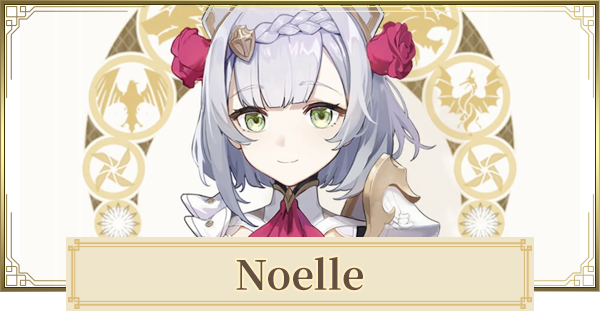 Noelle is a flexible character that can easily fill in the gaps of any team. She can also work as a Main DPS with her powerful Burst. This Team focuses on making use of Noelle's Burst for continues and strong Geo DMG against enemies.

Drains Stamina over time to perform continuous spinning attacks against all nearby enemies. At end of the sequence, perform a more powerful slash.

Summons protective stone armor, dealing Geo DMG to surrounding enemies and creating a shield. The shield's DMG Absorption scales based on Noelle's DEF. The shield has the following properties:

Gathering the strength of stone around her weapon, Noelle strikes the enemies surrounding her within a large AoE, dealing Geo DMG. Afterwards, Noelle gains the following effects:

When Noelle is in the party but not on the field, this ability triggers automatically when the active character's HP falls below 30%:
Creates a shield that lasts for 20s and absorbs DMG equal to 400% of Noelle's DEF. This effect can only occur once every 60s.

Every 4 Normal or Charged Attack hits will decrease the CD of Breastplate by 1s. Hitting multiple enemies with a single attack is only counted as 1 hit.

When a Perfect Cooking is achieved on an DEF-boosting dish, Noelle has a 12% chance to obtain double the product.

Constellation 6 Is The Greatest DMG Boost For Noelle

At 6 constellation, Noelle's Defense will increase the Atk making Noelle fully scale on Defense. This will not only increase the damage of Noelle, it will also make Noelle easier to build.

How To Use Noelle ?

Use To Get Shield

Make sure to only use Noelle's Elemental Skill during moments when you will most need a shield. This can be used to protect your main DPS or prevent Noelle from being interrupted during her attacks.

Noelle's Burst will imbue her normal and charged attack with Geo. Use it during moments where enemies are vulnerable or when you've set up for the offensive.

Allies are healed whenever Noelle's normal attacks hit an enemy while her Burst is active. As Noelle continuously dish out damage, the whole team will receive healing.

Noelle is a pretty versatile character because she can do a lot of things with her kit. She's a Shielder, a Healer, and a Geo DPS all at once! This saves a slot for a party team with how much she can do.

Requires A Battery To Charge Burst

Because of how long her Elemental Skill cooldown is and how little energy it gives, Noelle will require a Battery to continously have her Elemental Burst up.

Because of Geo not having Elemental Reactions, Noelle works best with other Geo characters. She's a flexible support, but getting the most out of her will require building specific team comps.

Noelle Reviews From Other Users

Got any thoughts and reviews about Noelle? Send us a feedback or ▼comment below for a chance to be featured in this article!

Comment or send your opinions about Noelle in the comments or feedback for a chance to be featured in the article!

Noelle has always dreamed to be one of the Knight since she was a kid. She is a hard working, polite and gentle woman, however in terms of skills, she is still lacking.

Maid At The Knight's Headquarters

Currently works hard also as a maid at the Knights of Favonius' headquarters, but she still doesn't forget to conduct some training to improve herself.

More coming soon as we will update this section once Noelle's own story quest is officially released! Check back again to get more updates.

Check out Noelle's Hangout Event for the meantime while we are all waiting for Mihoyo to release her own story quest.

How Tall Is Noelle?

There is no in-game and official data regarding the height of Noelle. We compared characters and Noelle is Medium comparatively.

How To Get Noelle?

The rate drop for Noelle is boosted at the following wish banners.

Characters With Same Element and Weapon As Noelle

All Characters With Geo Element

is prototype archiac good for Noelle? and i build her w 2 pc Gladiator and 2 pc Archiac petrac tips would be nice on how to improve her i maxed her out too i'm AR 55

where did the healers build go :(

Whiteblind R2+ is better than Unforged

Also, would "Gamblers" set be good on her?

yeah her c6 scales 50% of her def to attacks