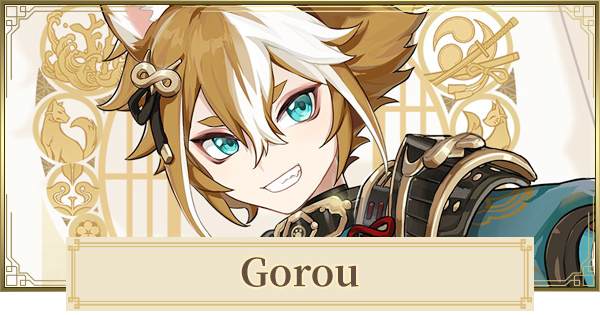 Gorou's kit focuses on providing defense and Geo DMG Bonus to the team. He can also deal damage that scales on his Defense through his Elemental Burst. However, his Elemental Burst is said to have a high cost which requires building Energy Recharge.

Best To Have At Least 180% Energy Recharge

Gorou will rely on Elemental Burst for damage. Depending on the Energy released by Goro's skills and its team mates, it might need 180 or more Energy Recharge for a higher up-time of Gorou's Ult.

The buff you receive from Gorou's Elemental Skill does not scale from the Defense of Gorou but rather the level of Talent that skill has. Defense will only matter on Burst's Damage and C4 Healing.

Gorou has the ability to boost Defense and Geo DMG bonus of the teams making him a Niche yet very powerful support to Defense scaling Geo Characters.

Perform up to 4 consecutive shots with a bow.

Provides up to 3 buffs to active characters within the skill's AoE based on the number of Geo characters in the party at the time of casting.

Gorou can deploy only 1 General's War Banner on the field at any one time. Characters can only benefit from 1 General War's Banner at a time. When a party member leaves the field, the active buff will last for 2s.

Adjust the location of the skill.

Displaying his valor as a general, Gorou deals AoE Geo DMG and creates a field known as General’s Glory to embolden his comrades.

If Gorou falls, the effects of General's Glory will be cleared.

Gorou receives the following DMG Bonuses to his attacks based on DEF:

Heedless Of The Wind And Weather

After using Juuga: Forward Unto Victory, all nearby party members's DEF is increased by 25% for 12s

Displays the location of nearby resources unique to Inazuma on the map.

With Constellation 4, Gorou will not only provide buffs and shields but also healing. This gives Gorou another role to fulfill besides buffing and shielding your party.

Constellation 6 is ideal for Geo Comps since it will increase the Crit DMG of party members' Geo DMG based on the buff level of the skill.

How To Use Gorou ?

Provides Buffs Based On Number Of Geo Characters

Gorou's Elemental Skill bonuses activate when the required number of party members is present at the time of casting. The field will be destroyed when you cast another Elemental Skill or Burst.

Provides Shields That Pulls Elemental Shards With His Burst

His Burst provides similar buffs with his Elemental Skill but it will also generate crystal collapses that deals AoE Geo DMG to opponents. Gorou will pull an elemental shard in the AoE of his burst towards the active character every 1.5s. This can easily provide your characters a shield created from the Crystallize reaction.

C4 Will Give Healing

Having Gorou's C4 will give you access to healing whenever his Elemental Burst is in the "Impregnable" or "Crunch" states. The heal is based on 50% of Gorou's DEF and triggers every 1.5s. This applies to active characters within the field's AoE.

Works Best As A Team Buffer

Gorou can buff the team while dealing Geo DMG to enemies. He works best as a team buffer that will only be on the field during the start of the combo with your characters or when his Elemental Burst can be unleashed.

Gorou can buff the team greatly while also dealing decent Geo DMG with his burst that scales from his DEF. He can have 3 of his buffs active depending on the number of Geo characters in your party. The buffs can both come from his Burst and Elemental skill which makes it have 100% uptime so long as you often switch to Gorou.

Can Give Consistent Shields

Gorou can generate an elemental shard every 1.5s from his elemental burst consistently if you have an off-field element and even pull them towards the active character. This makes him an excellent shielder for your team!

Gorou's powerful skill effects are locked behind higher constellations such as his C4 which gives him an additional role such as healing and providing more survivability for the team. You will also need to get his C6 if you want to provide more DMG for your Geo characters.

Niche Support That Works Best Only Other Geo Characters

Gorou's team comps doesn't vary that much since it's almost required that he has another Geo character with him if you want to utilize all of his buffs. This makes him restricted to mostly Geo team setups.

Gorou Reviews From Other Users

What Is Gorou's Tier For You

General Of The Resistance

Gurou is quite young to be leading troops, but every soldier under the resistance respects him as their general. Outside of the war, he's outgoing and is rather friendly.

Leads The Troops In Battle

If Kokomi is the brains of the Resistance, it's Gurou that stands as its body, leading the troops in the battlefield. He fights against Kujou Sara and her army in Nazuchi Beach before arrival of his mistress.

Gorou appeared as the general of the Resistance Army against Raiden Shogun's Army in the Archon Quest Chapter 2. Gorou is shown to be trusted by Sangonomiya Kokomi as well as his subordinates.

How Tall Is Gorou?

There is no in-game and official data regarding the height of Gorou. We compared characters and Gorou is Medium comparatively.

How To Get Gorou?

Get From Arataki Itto Banner

Characters With Same Element and Weapon As Gorou

I'd also suggest the Exile 4pc artifact set. +20% ER, and a boatload of particles for the whole team on ult. It's a 4* set, so only raise up to level 16, but Gorou's damage and healing aren't material enough to worry about the missing 4 levels.

Yeah, I mean, I said he can also "deal damage" while healing, I took in count his passives too. It's just that I wanted to bring attention to his C4, because some people may think that Geo Bonus could be good on him, to which I disagree because he relies a lot on his DEF stat.

You have listed that def only affects C4 healing and burst damage.
You might want to double check his second passive talent.
154% of def is applied to his skill damage.

I was also wondering if EM substats would be useful for him, since some of his constellations and pasives mention shards.

I would focus on building his DEF with 4pc Husk, especially if you have his 4th constellation, since he turns into a healer (!) and can become full support, while also dealing damage. (+)