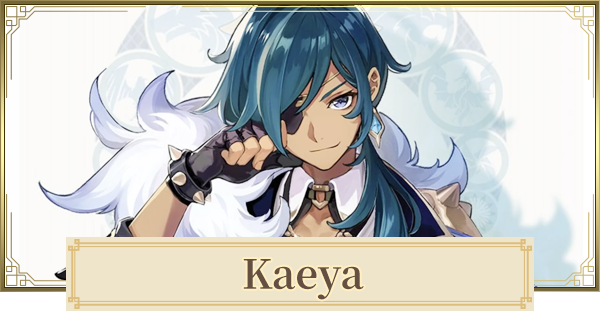 This build is excellent for elemental reactions especially melt damage. Freedom-Sworn is a great sword as it can provide buff for everyone, amplifying the whole team's damage output.

Kaeya has a strong base attack making his normal attacks strong. Also, since he can inflict Cryo DMG easily, it is great to pair him with an Electro to trigger superconduct which increases the Physical DMG taken from enemies.

Keep The Uptime Of Burst For Continuous Cryo DMG

Kaeya's Burst is great as it stays on the field even after switching to another character. Keeping the uptime of his Burst provides additional damage and a chance to trigger Cryo-related reactions.

Aim For Sword With CRIT Stat Or Physical DMG Bonus

Kaeya's Normal Attack inflicts Physical DMG that can also land a CRIT Hit so it is recommended to use a sword with either CRIT Stat or Physical DMG Bonus as a secondary stat.

The best & 2nd substitute can amplify Kaeya's Burst DMG while using 4-piece Noblesse Oblige can provide an ATK% buff to everyone that benefits the team. You can choose either of the recommended artifacts according to your preference.

It is not recommended to use 4-piece of either Pale Flame & Bloodstained Chivalry as the effects are situational. Instead, use artifacts whose 2-piece provides Physical DMG Bonus & ATK%.

Kaeya can work either as a physical main DPS or a Cryo burst Sub-DPS. His Burst is highly valuable since it's an on-field ability and can fit in most Cryo Reaction comps

Other Characters That Works With Kaeya

Kaeya Guide - How To Use Kaeya?

Kaeya's Elemental Skill is quick to match its very short cooldown. It can easily apply Cryo to enemies and with its short duration, it can be done in short successions.

Because of the short cooldown, Kaeya's Elemental Skill can easily be spammed to gather energy for his Burst. It's a pretty reliable way of ensuring he always has enough energy for his burst.

Kaeya's Elemental Burst will apply Cryo to enemies hit by his circling icicles. So long as it's active, all enemies hit by it will receive Cryo damage.

As an on-field Burst, it's easy to pair Kaeya's Burst with another character to continuously deal Elemental Reactions. Just ensure you're near enough the enemies to apply Cryo to them with Kaeya's Burst.

Should You Get Or Wish For Kaeya?

Kaeya Is A Free Character

Constellation 1 will boost the Crit Rate of Kaeya making him a lot easier to build.

An additional Icicle will be added in the Burst of Kaeya giving players a more stable Cryo infliction and a boost on damage with Constellation 6. This will be great for Burst support Kaeya.

Im sorry, but i kinda disagree with kaeya being a sub dps, i think he is excellent as a main dps too. and if u first use kaeya's burst then diluc's then you can get more melt. since diluc has flames on him blade for a while, which is cleared if he leaves the field.

Aquila Favonia is also good for him if your doing physical damage Kaeya.

FINALLY A SITE NICE TO KAEYA.

Finally. The only correct website that says Kaeya belong to A tier