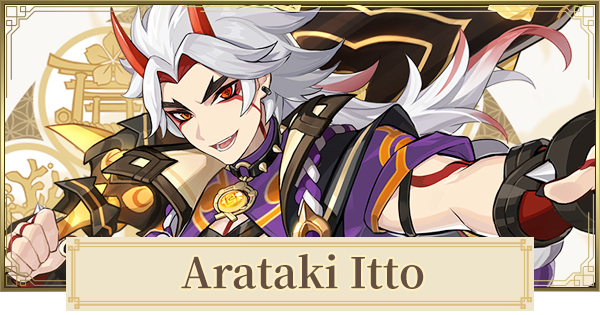 Arataki Itto boosts his skills's damage based on his Defense so maximizing his defense would be ideal to deal great damage to enemies.

Perform up to 4 consecutive strikes. When the 2nd and 4th strikes hit opponents, Itto will gain 1 or 2 stacks of Superlative Superstrength, respectively.

Max 5 Stacks. Triggering this effect will refresh the current duration of any existing stacks.

Plunges from mid-air to strike the ground, damaging opponents along the path and dealing AoE DMG upon impact.

Hurls Ushi, the young akaushi bull and auxiliary member of the Arataki Gang, dealing Geo DMG to opponents on hit. When Ushi hits opponents, Arataki Itto gains 1 stack of Superlative Superstrength. Ushi will remain on the field and provide support in the following ways:

Ushi is considered a Geo construct. Arataki Itto can only deploy 1 Ushi on the field at any one time.

Time to show 'em the might of the Arataki Gang! For a time, Itto lets out his inner Raging Oni King, wielding his Oni King's Kanabou in Battle. This state has the following properties:

・Converts Itto's Normal, Charged, and Plunging Attacks to Geo DMG. This cannot be overridden.
・Increases Itto's Normal Attack SPD. Also increases his ATK based on his DEF.
・On hit, the 1st and 3rd strikes of his attack combo will each grant Arataki Itto 1 stack of Superlative Superstrength.
・Decreases Itto's Elemental and Physical Resistance by 20%.

The Raging Oni King state will be cleared when Itto leaves the field.

• Each slash increases the ATK SPD of the next slash by 10%. Max ATK SPD increase is 30%
• Increases his resistance to interruption.

This effects will be cleared once he stops performing consecutive slashes.

Bloodline Of The Crimson Oni

Arataki Kesagiri DMG is increased by 35% of Arataki Itto's DEF.

When a party member uses attacks to obtain wood from a tree, they have a 25% chance to get an additional log of wood.

With Constellation 2, Arataki Itto will decrease his Elemental Burst CD by 1.5s and restore 6 energy to Itto for each Geo character in your party. CD can be decreased up to 4.5s. This makes Itto have 100% uptime for his Elemental Burst.

How To Use Itto ?

Arataki Itto's Elemental Skill, Ushi, can taunt enemies making them focus on Ushi rather than you. Upon summoning and hitting opponents with Ushi, it will also release Geo Energy Particles

When Ushi is hit by opponents, Itto would gain Superlative strength enabling Itto to deal his powerful charge attack. Once Ushi is destroyed, Itto will gain another stack of Superlative Strength.

Arataki Itto changes his weapon to his signature Oni King's Kanabou in battle and infuses his Normal, Charged, and Plunging attacks to Geo DMG.

Arataki Itto will gain a 10% ATK SPD Bonus and ATK Boost based on his DEF. Because of this, most of the DMG of Arataki Itto happens when he is at Burst Mode.

What Is Superlative Strength?

▲ You can tell the number of stacks through the Oni aura behind Itto.

Use The Stack Of Superlative Strength At Charge Attacks

When you have a Superlative Strength Stack, the charge attacks of Itto will be a special move dealing more damage and consumes no stamina. It will also end in a devastating Plunge attack.

One Of The Fastest Claymore Users

Itto, despite being a claymore user, is able to swiftly move towards the enemies and is able to further increase his speed preventing a clunky playstyle that is common to Claymore users.

Itto's skills have a semi-large AOE enabling you to hit multiple enemies with powerful attacks. The finishing of his Charge Attack will further increase this AOE making Itto great against group of enemies.

Itto's damage is mostly dependent on Itto's Elemental Burst. However, Itto has a fairly high Energy Requirement which may require a Battery in the teams that he is in to keep the Elemental Burst high.

While his burst buffs his ATK and ATK SPD, it also has a drawback which lowers his Physical and Elemental Resistance by 20%. This leaves him vulnerable from powerful attacks.

Has Diffuculty On Breaking Shields

Arataki Itto has difficulty breaking through shields because of the limited reaction that Geo can produce. When using Itto in a Geo Team, it is better to leave one character slot for shield breaking Elements in the team.

Itto Reviews From Other Users

What Is Itto's Tier For You

Leader Of The Arataki Gang Of Hanamizaka

Fast as the wind and mighty as thunder, he is an intrepid man with Oni blood running through his veins. His gang is not acknowledged by the Shogunate despite of what he does. ​Arataki Itto does some odd jobs to stay solvent, usually working one day before taking three days off.

Has His Own Story Quest

Arataki Itto will have his own story quest which will arrive on the second phase of the Version 2.3 Update on December 14, 2021.

How Tall Is Itto?

There is no in-game and official data regarding the height of Itto. We compared characters and Itto is Tall comparatively.

How To Get Itto?

Get From Arataki Itto Banner

Itto is the best geo daddy.

i love you itto sm

Should I pull for Itto or wait for Raiden Shogun rerun? Cause they say she may
will be in 2.5 banner.

One of the easiest top-tier characters to build in the game! He can use any stat except HP and EM!

the 3 weapons people are using on him with the differences between them.

Great Geo, a Must-Roll if not going for Ganyu