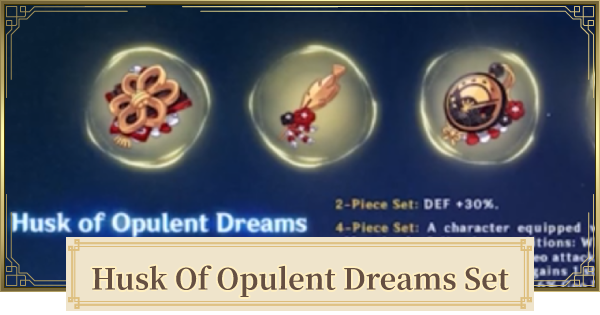 The two-piece set bonus increases DEF by 30%. Since it's a percentage, the amount increase is dependent on the user's current DEF.

The four-piece set bonus applies the Curiosity effect to the wearer. The character will gain a stack whenever they hit an opponent with a Geo attack, each Curiosity stack will then increase DEF by 6% and Geo DMG by 6%. This can stack up to 4 times.

Characters that scale of DEF will get a lot from this set. The 2-Piece Set gives a chunky +30% DEF, amazing for any DEF Scaling character.

4-Piece Set Is Only Applicable For Geo Characters

However, the 4-Piece Set is specific to Geo characters only. It will not work on other element characters.

Unlike main stats, Sub-stats will only be randomly applied & enhanced every 4 levels of artifact upgrades. This means that getting a perfect stats for the artifact may require some grinding.

Some Stats Has Fixed Value Or Percentage Increase

Some stats increase has 2 types of buffs:A Fixed Value or Percentage Increase (Such as DEF + 10 vs DEF +10%). A rule of thumb is that a percentage increase will be more beneficial in the later stages of the game due to stat increase from leveling up.

Husk Of Opulent Dreams How To Get & Domains

Drops From The Following Bosses

This Artifact Does Not Drop From Enemies

Currently, this Artifact Set cannot be farmed by defeating enemies since it does not drop from any of them.

Farmed In The Following Domains