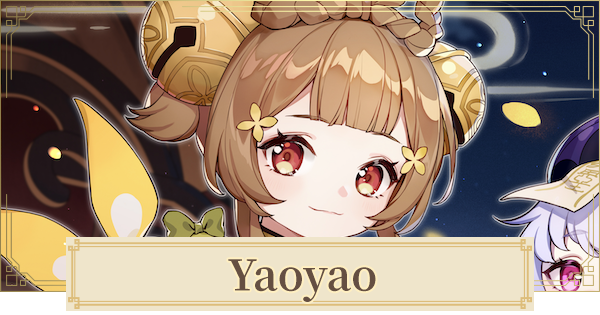 This part of the article includes speculations about the character.

Yaoyao is a possible playable character that soon will be added into the game as also rumored to be part of the 1.6 Update. She could be a surprise character similar to that of Hu Tao during the 1.3 version of the game.

This part of the article includes speculations about the character.

Will Yaoyao Be Playable?

Yaoyao is often mentioned by other players and also possibly appeared with a 5★ Character in an official art making us believe that there is a big chance that she is gonna become a playable character in the future.

Yaoyao wears a green outfit and seems to be dressed like a farmer or herb colector like Qiqi. A Dendro vision would be suitable for her design.

What do you think Yaoyao's Element is?

If Yaoyao becomes the first Dendro, it would be a great introduction to the element to make her a catalyst. The players will be able to see the uses of Dendro characters in the game easier.

What do you think Yaoyao's Weapon is?

If Yaoyao will be a Dendro character, you can imagine her being like a Dendro Samachurl supporting enemies from behind. What do you think of Yaoyao's Role let us know in the ▼Comment below

The Girl Who Appeared At Mid-Autumn Festival Picture?

In the official Chinese forum of Genshin Impact, a little girl who is wearing a Liyue-style outfit appeared with Qiqi. It is rumored that this girl is Yaoyao and it seems to fit Beidou's description of her as a playful little girl.

Little Girl Who Works Under Ganyu

Ningguang mentioned that Yaoyao is a girl who Ganyu took under her wing. She seems to be a little girl that has a strong connections with the Adepti.

I mean, Beidou is electro, Kazuha is is anemo. So It's entirely possible she's something other than dendro. Since we have a chibi claymore user coming out, I'm hoping she's a polearm user.

She honestly seems like a Geo or Dendro character to me, but I'm still waiting for a hydro claymore user