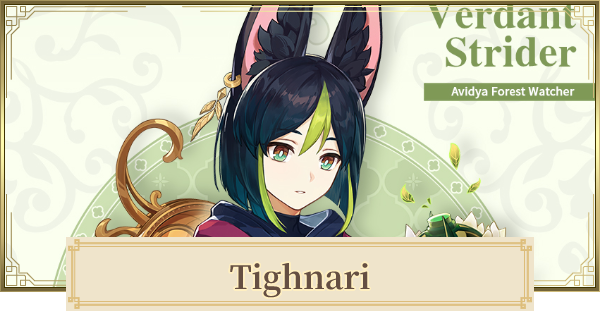 Tighnari's Damage mostly comes from his Charged Attacks so using weapons that buff these attacks is recommended.

Reactions and CRIT Status are important damage source for Tighnari. Make sure to increase Elemental Mastery to 200 or above and create a 1:2 ratio with your CRIT Stats.

Tighnari excels at being the main damage dealer and doing big damage by triggering Dendro Elemental Reaction such as Quicken. This team focuses on increasing the damage of such reaction.

Other Characters That Works With Tighnari

Tighnari Guide - How To Use Tighnari?

▲ The fairies that floats shows how many quick charge attack you can release.

Using the Elemental Skill will not only let you gather energy, it also quickens the Charge speed of aimed shot of Tighnari. Aimed Shot is the main source of damage so make sure to use Elemental Skill before trying to deal damage.

Grabs The Aggro Of Enemies Within Its AoE

Enemies within the AoE of the Elemental Skill would not notice Tighnari and proceed to attack nonexistent characters in the mist. They tend to not move away from the Skill's AoE so it also allows you to create "kill-zones" when used with skills of other characters such as Lisa, Collei and Amber.

Tighnari's Elemental Burst launches several arrows that follows opponents. This is a high damage skill that will help on clearing time-gated challenges such as the Spiral Abyss. It has a low cooldown and burst cost making it a great finisher for every combo.

Should You Get Or Wish For Tighnari?

Pull For An Easy To Use Dendro DPS

Tighnari has a straight forward kit that can easily show you the effects of Dendro. If you want to quickly learn and play Dendro characters, Tighnari is recommended.

Constellations Can Be Obtained On Future Version

Tighnari, at Constellation 4, allows you to buff the Elemental Mastery of all members of the party enabling the party's damage to double.

If your Tighnaris damage is on the down low then you're doing something wrong. Mine wrecks stuff on his own, having the rest of the party just makes it quicker. Hasn't left my team since his first day. Neither has Yae and people hated her on arrival too. What you all got against foxes...

Tighnari is going to need A LOT to be a dendro Ganyu lol
His damage is really on the downlow, he feels more like a pure dendro stick.
I see everyone saying stacking EM fixes this but i digress, CD still gives better results as EM scales with a ratio of 0.006 power for every 1 EM