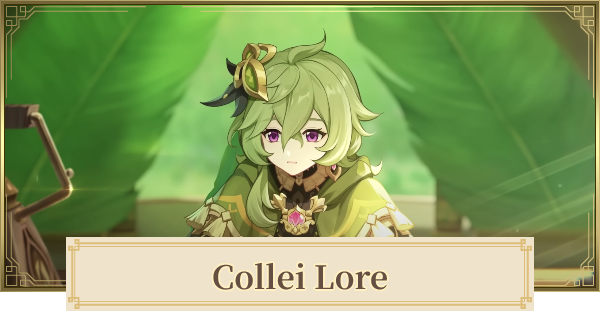 Confirmed Release In First Phase Of The 3.0 Update

It's been confirmed during the 3.0 Livestream that Collei will become a playable character in the 3.0 Update. She will be the first 4-Star character Dendro!

Collei will be one of the featured 4-Star Characters during Tighnari & Zhongli's double banner. This will happen in the first phase of the 3.0 Update!

▲ Archon Residue is a forbidden power with painful side effects

Collei is one of the main characters in the Genshin Impact Manga series. She doesn't have a vision but was instead, injected with Archon Residue as a result of Barnabas and Dottore's experiments on her.

Collei was born in poor health. Her parents brought her to Barnabas and begged him to save her. Barnabas agreed to save her but without them knowing, he conducted experiments on her as he is working with Dottore.

Collei appeared cold to people she met because of her past experiences, having preferred to be alone. She began to open up when she traveled to Mondstadt and met Amber with whom she formed a friendship.

While at the Library, Collei & Amber met Cyno who is a scholar from Sumeru. Cyno offers to help Collei by putting her Archon Residue in a dormant state to which she agrees to.

After her recovery, Collei decides to follow Cyno to Sumeru in order to learn more things about the world. She wrote a letter to Amber giving her thanks for her time in Mondstadt.

In the Teyvat Chapter Interlude Teaser, Collei was featured once again. She is a trainee patrol under the supervision of Tighnari.

Will Play A Part In The Sumeru Archon Quest

Besides becoming a playable character in the 3.0 Update, Collei will also become a prominent character during the Sumeru Archon Quests. She is heavily featured in the Archon Quests art!

Voicelines Of Other Characters Talking About Collei