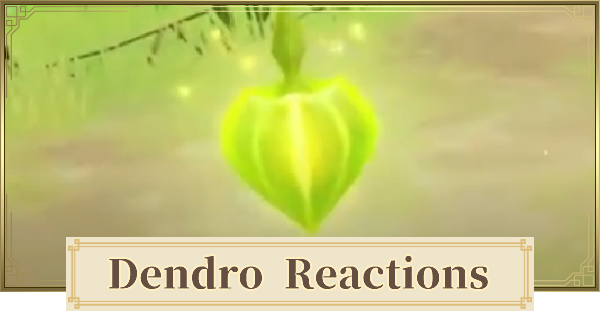 What Is Dendro? - Release Date

Dendro is a plant-based element. It's represented by the color of Green, matching that of the power taken from nature!

Dendro Has Confirmed Since Early Updates

Although its only going to be introduced in the 3.0 Update, there are enemies and characters that were already shown to be Dendro users. Baizhu and Dendro Slimes are samples of this.

The information below was based on the 3.0 Livestream. It's still a work in progress and will be updated once more information regarding Dendro Elemental Reactions are released.

Catalyze was shown as the effect on an object when Electro was applied to it. Quicken is the elemental reaction that occurs when you hit an enemy with Dendro & Electro.

If you attack a Dendro Core with Pyro, it will cause Burgeon. Burgeon will deal higher AoE Dendro DMG when activated.

When a Dendro Core is hit with an Electro element, it will cause the Dendro Bloom to transform into homing Sprawling Shots that deal Electro damage.

Aggravate can be triggered by attacking an enemy inflicted with Quicken with Electro. This will increase Electro DMG to that attack!

On the other hand, if a Quickened Enemy is attacked with Dendro, it will cause Spread. This will increase the Dendro DMG of that attack!

Character & Enemies That Use Dendro

Confirmed Characters That Use Dendro

Enemies That Use Dendro

Some targets that have Dendro characteristics through interaction with Hydro, Pyro, and Electro Elements, transitions between different states can be achieved resulting in different interactive effects.

Depending on the environment that you are in and the effects of the elements you are exposed to, monsters will switch back and forth between different states other than changes in attack methods. Defeating monsters when they are in specific states will also get you rare special materials.