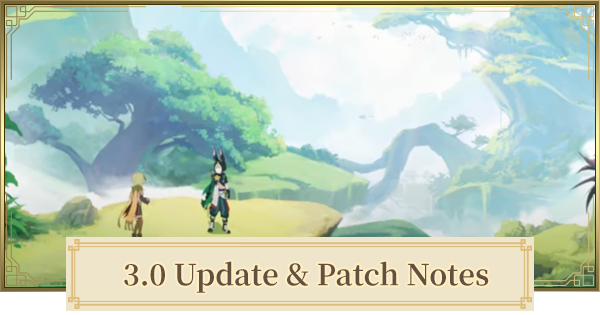 Countdown Until The Release Of The Event

The Dendro Element will be introduced in the Sumeru nation. Not only will characters make use of the new element, the nation itself incorporates Dendro!

As you explore Sumeru, you will come across new exploration features, including new puzzles and other items. We'll add more about them once more information regarding them are revealed.

Akasha Terminals are a way to connect to the Akasha itself wherein all of Sumeru's information and knowledge are stored.

Akasha Terminal - Uses & How To Get

Spirits are the embodiment of the Forest in Sumeru. It's still not sure what they do, but they could work similar to the Tanukis in Inazuma!

Like in the previous nations, it's likely that Sumeru will have their own Dendroculus or something similar that you can offer to the Statues of the Seven within the nation.

The following characters that are closely related to the Sumeru Nation will be released.

Tighnari Is The First Dendro 5★ Character

Tighnari is the first 5★ Character that uses Dendro Element. He will be released in 3.0 and you can get to know him more in his upcoming story quest.

Collei Is One Of The 4 Star Characters

Collei, the new 4 star character, will be released in the banners with Tighnari and Zhongli as one of the featured 4 stars. Collei is also the first 4★ Character that uses Dendro Element. She will be featured in one of the upcoming events in 3.0 version.

For Phase 2 Banners, it will be another rerun of Ganyu and Kokomi.

Dori Is One Of The 4 Star Characters

Dori, another new 4 star character, will be released in the banners with Ganyu and Kokomi. It appears the she will appear in the Archon Quest: The Morn a Thousand Roses Brings as shown in the trailer released by the official YouTube Channel of Genshin Impact.

In the Graven Innocence event, the traveler together with Collei will look for toy inspiration. Players will need to take photos, battle with two kinds of bosses in Sumeru, do time challenges, and battle with new enemies in Sumeru. Also, when players go through the tutorial quest of this event, players can get Collei for free.

Fayz Trials is a Battle Event with 7 Stages and there will be a trial party characters per stage that will be provided.

Tablet Analytics is another Battle Event. In this event, there will be 4 stages and each stage has 3 rounds. Players will be given an option to create their party using their own characters or the provided trial characters.

The Lost Riches Event will be available again after the 3.0 update. You get to choose another Pet Seelie as a reward upon participating in the event!

There will be two Archon Quests that will occur in 3.0 version.

We will get to know more about Tighnari in his own story quest.

Version 3.0 will add the new region, Sumeru. Sumeru is the land of Dendro and Knowledge. It is said to be ruled by Kusanali

Deepwood Memories seems to be a Dendro focused artifact great for Dendro DPS.

On the other hand, Gilded Dreams is great artifact for reaction based characters such as Kuki Shinobu.

Over many long years, this large fungal beast has morphed into a unique form.

A huge vine that has morphed into a monster through the conduction of high-voltage currents through the ley lines.

Ruin Drake can periodically release a torrent of energy and based the Elemental Type it suffered to increase its own Elemental RES against this element.

Currently, the name of these new enemies have not been confirmed yet. We'll update this section once more information regarding them is known!

According to rumors, these are the local specialties for the Sumeru nation.