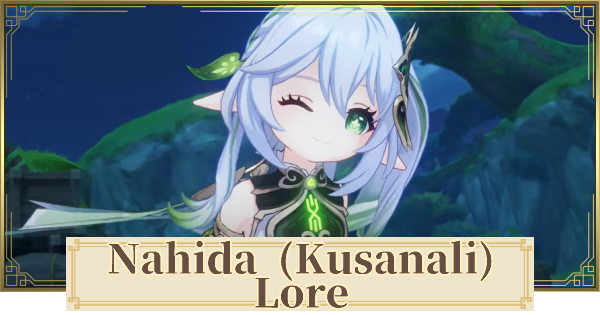 Introduced Herself As Nahida

The Dendro Archon appeared in the Archon Quest: The Morn A Thousand Roses Brings to help the Traveler and she initially introduced herself as Nahida.

Traveler Identified Her As Kusanali

In the Archon Quest: The Morn A Thousand Roses Brings, Traveler was able to determine that Nahida is in fact Lesser Lord Kusanali and the current Dendro Archon.

She Can Occupy Others Consciousness

Akasha Terminal - Uses & How To Get

Residing In Sanctuary of Surasthana

When the Sages found her newly born body, they kept her in Sanctuary of Surasthana for the sake of "protecting" her.

The Sabzeruz Festival is a festival in Sumeru that commemorates the birth of Lesser Lord Kusanali. Some in Sumeru Akademiya oppose the festivities because they see it as confirmation of Greater Lord Rukkhadevata's death

i dont get the complaints from ironically females about her being female... 2 out of 3 archons male. you have to remember they're following a story so it's not always up to them to be canon or accurate

why not dark skin

page is outdated, kus****is looks have been already leaked, it will be a small female model, somewhat similar to klee, but its still unknown what weapon type she will have.

I'm sooooo frustrated right now D: We wanted a pure male archon for this one ! An other husbando ! We need an other daddy dendro like Baizhu !

Hi, There was a theory that Kus****i isnt the dendro archon. Yae never said it was the dendro archon, just the ruler. Which is quite strange, It seems likely but we will see how it plays out