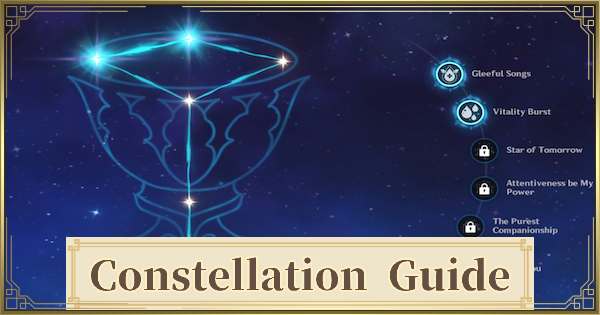 How To Unlock Constellations?

Every character, other than the main character or Traveler, has its own unique Stella Fortuna. This item is required to unlock the abilities in the Character's Constelation.

Check Out The Dupes Article Here

Stella Fortuna Can Be Obtained Through Wishes

Stella Fortuna Can Be Bought At Paimon's Shop

Razor and Amber's Stella Fortuna can be bought at Paimon's Shop in exchange for Masterless Starglitter. You can only buy them once a month.

The Main Character has two constellations for each of his elements. Separate items are needed to be collected to unlock its constellations.

For Anemo - Memory Of Roving Gales

To unlock Constellations of Traveler synched in Anemo, you must collect Memory Of Roving Gales. It can be obtained using the following method:

Buy It At The Souvenir Shop At Mondstadt

You can buy one Memory of Roving Gales at the Souvenir Shop at Mondstadt in exchange of Anemo Sigil. Anemo Sigil often drops from treasure chests in the area protected by Anemo God.

You can receive Memory Of Roving Gales by raising your Adventure rank to a certain level. Talk to Katherine of Adventurer's Guild to check and claim your rewards.

For Geo - Memory of Immovable Crystals

To unlock Constellations of Traveler synched in Geo, you must collect Memory Of Immovable Crystals. It can be obtained using the following method:

Buy It At The Souvenir Shop At Liyue Harbor

You can buy four (4) Memory of Immovable Crystals at the Souvenir Shop at Mondstadt in exchange of Geo Sigil. Geo Sigil can be collected by opening treasure chests in the area protected by Geo God.

You can get a Geo Sigil by completing Main Quests. Complete the Main Quests as soon as it is unlocked to be able to get Memory of Immovable Crystal faster.

What Happens When You Unlock?

Leveling the Constellation will give an additional effect or status buff to the character's skill. This makes the skills increases the uses of the skill or make it more powerful.

My Char miss traveler last one of Anemo Constellations, any ideas ?