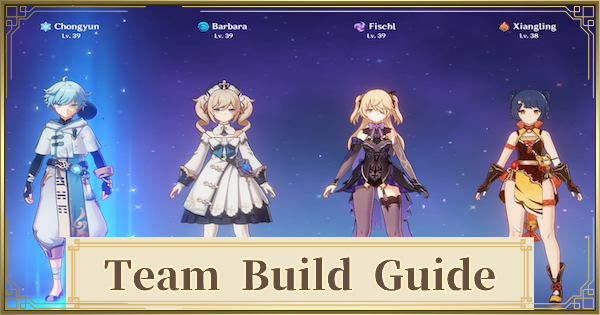 With only 4-star characters, this is one of the best teams at a relatively low cost. There's great synergy between each member as they can easily procure Melt, Vaporize, or Freeze. The name "National" refers to how strong the team is. They said that this team is strong enough to fight in National Competitions.

The main difference between this and the National Team is the inclusion of Overload as a reaction thanks to Raiden Shogun. Timing is essential with this team comp when using Skills and Burst to not mess up the Vaporize-Electrocharged rotation.

Morgana is a staple team comp focusing on permafreezing enemies. With the recent buff to Elemental Mastery, the team's possible damage output has increased even further. The downside is, that it's pretty expensive with 3 5-star characters, 2 of which are from limited-time banners.

With no reactions, this team is still capable of dishing out high amounts of damage thanks to the Geo resonance and overall damage output of the whole team. Pretty expensive since it's a team made up of 4 5-Star Characters.

This team has a high total burst cost enabling Raiden to easily gain maximum stacks needed for her Elemental Burst. Raiden will battery Eula with Diona enabling continuous Burst for the team.

This comp is one of the highest damage comp in-game and is especially effective when battling multiple enemies. It is composed of characters from different nations thus International.

The new effect of Hydro Resonance increases the team's HP, which is extremely beneficial for Hu Tao. Xingqiu and Yelan can keep up with Pyro's infliction of Hu Tao guaranteeing that every hit of Charged Attack would be Vaporized. Zhongli also benefits from is there for shield and the resistance shred but if you are confident with your survivability, you can opt to use Kazuha or other Elemental Buffers.

This team centers on Gorou's ability to boost Geo DMG Bonus and Defense fully supporting the DMG of Itto and Albedo.

The Final Member Is Flexible

The fourth character is fairly flexible so long as they can bring off-field DMG that is not Anemo or Geo. Diona is preferred for a consistent shield and healing. Characters that can provide a lot of energy is also recommended such as Raiden Shogun.

Sukokomon is a team comp focusing on creating multiple elemental reactions and is a low-investment friendly team with Kokomi as the only 5-star. This team can deal with multiple damage instances by using Guoba, Jellyfish, and Oz simultaneously.

The downside, however, is that this team comp is very difficult to use as it requires timing and a specific rotation to maximize damage output from the elements.

This team can continuously trigger Bloom elemental reaction and deal increased Dendro Damage to multiple enemies with multiple blooms. You can easily clear even the highest contents in game with this team.

When attempting this one-shot build, your main priority should be Childe. Your supports can just be partially built, so long as they have the right Artifacts to further increase Childe's damage. Zhongli can also be exchanged for Mona for her increased damage to enemies.

One of the unique teams that do not rely on Elemental Resonance for damage and utilizes Yun Jin's powerful buff. The final two characters are interchangeable depending on the situation but it would be better if there are no elements that will overlap. Sayu can be replaced with Jean and Fischl can be replaced with Raiden Shogun or Xingqiu.

Thanks to Ayaka's constant Cryo infusion, by herself, she can set up melt comps while Xiangling's Elemental Burst is up. Remember to build both Ayaka and Xiangling as DPS to get the most damage out of Melt.

This team comp is pretty flexible and less expensive than other melt team comps. Yan Fei is recommended since she doesn't need her Skills or Burst to deal consistent Pyro damage, but she can be exchanged for any other Pyro character you own.

Ayato has an amazing hydro application, making it easy to deal with Vaporize when you have Xiangling's Burst up. It's a rapid, melee close-range team that can deal with both solo or multiple enemies.

This team focuses more on Xingqiu than the Pyro DPS. Xingqiu's hydro application is consistent and since his Elemental Burst is on-field, it can fit any of the other DPS Pyro characters.

Yelan is another character similar to Xingqiu that can proc Hydro off the field consistently. When paired with Hu Tao, you can easily deal powerful Vaporize damage. Since Hu Tao is a character that needs to be at lower HP to maximize, powerful shielders like Zhongli are a good pair with her.

Since Childe can easily apply Hydro to multiple enemies, this is a perfect team build for him to spread Electro-Charged among multiple enemies. Beido can also be the on-field DPS while waiting for Childe's Elemental Skill to be back from cooldown.

Both Lisa and Fischl have on-field Electro abilities that are beneficial to Barbara. The team itself is inexpensive since it consists of 3 4-star characters that were given for free!

Eula is currently the best Physical Damage character in the game and benefits greatly from Superconduct. She'll be on-field for most of the time so it's best to have Electro users that have on-field abilities with her.

This team is a great option for a high DMG Cryo Team. It also utilizes the power of Shenhe and a stable team that does not require Bennett.

A bit of a budget team, if you don't have Ayaka, you can use Chongyun for Cryo infusion. Xingqiu and Rosaria will be the main damage dealers with Chongyun and Barbara assisting with constant Freeze application.

Scaramouche Team Comp focuses on increasing the DMG of Scaramouche while allowing multiple Swirl reactions. The swirled element by Scaramouche would also provide additional buff to Scaramouche furthering the DMG and utility of the character.

This team focuses on using Heizou as a Driver through his normal attacks. You can use any Off-Field supports in this team. However, it is recommended to think of the reactions that the off-field character produces and make sure it benefits you.

This team is great for continuously dealing with consistent overload damage. It also lessens the negative drawbacks of overload that pushes back enemies because of Yoimiya's range. If you do not have Yoimiya, you can also use Yanfei as a replacement.

Just like Ayato, Yelan can be combined with the Dendro Traveler to continuously trigger Bloom reactions while Kazuha buffs the damage and Kokomi keeps them alive and can also consistently triggers the Bloom reaction.

Since Dendro and Cryo do not have elemental reaction, Ganyu's Elemental Skills, and Burst can make enemies frozen without affecting the Dendro application to the enemies which make the enemies unable to move from the Dendro Cores that can deal increased Dendro AoE Damage. Aside from that, Ganyu can easily burst the enemies with her charge attacks. If you don't have Ganyu, you can also use Rosaria or Kaeya.

Currently, there are only a few Pyro characters that can fit with a Burgeon comp since it requires a shield and a healer. This is the best team to constantly apply Burgeon to the enemies and deal increased AoE Damage continuously without your own characters suffering too much damage from the Burgeon itself. Xinyan and a C4 Yanfei may replace Thoma since both can provide a shield as well.

This team is great for continuously dealing with Hyperbloom damage with Shinobu's AoE Skills. Blooms will continuously be triggered because of Nahida's Skill, and Burst of Xingqiu. Alhaitham will deal Dendro DMG which will also help with the production of Bloom. Spread will also be triggered in this comp.

This team can continuously deal Hyperbloom damage while making the enemies unable to move thanks to Ayaka's constant Cryo infusion. If you do not have Ayaka, Rosaria and Kaeya can also be good replacements.

Cyno can be replaced with any Electro DPS characters such as Keqing and Yae Miko. Cyno works best because of his Excellent Elemental Mastery scaling.

You should rewrite the article, don't just change a few words.

The top teams to clear Abyss currently are really different from the past.

Best Team for exploration must include Wanderer.

Hello! Thanks for the guide, it's really helpful.
If i may, i'd like to point out that the Team notes for the Tighnari Quicken Team Comp doesn't fit.
Have a nice day!

My team comp is Ganyu for Damage, Kazuha for Sub DPS/Swirls, Xingqiu to apply Hydro and be a support, and Bennett is for heals. Please tell me if this is or isn't a good team comp, but it works for me, sooo..