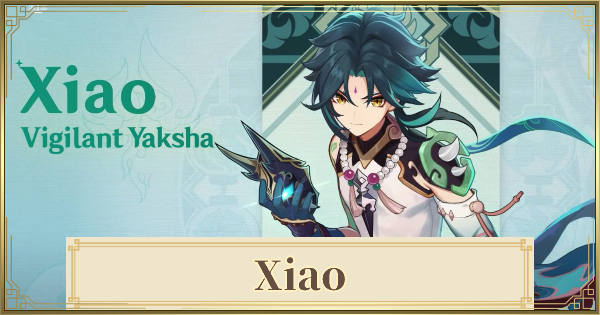 Should You Pull For Xiao ?

Xiao is a top-class DPS that does not need any reaction to deal powerful damage. Despite using Anemo, he does not rely on Swirl but instead deals raw elemental Damage. If you need another DPS, Xiao will definitely be of use. It is recommended to pull for his constellation to upgrade his talents that can significantly improve his playstyle & maximize overall damage.

With constellation 1, Xiao will have 3 charges of his skill enabling him to gather more energy with ease helping his Energy problems by alot.

Constellation 6 Will Change His Playstyle

At Max constellation, Xiao will receive a charge of his Elemental Skill when you hit 2 enemies or more with his Plunge attacks during Elemental Burst. Because of this, your main damage source will be the Elemental Skill instead of Plunge Attacks.

Since the sub stat of Blackcliff Pole is CRIT DMG, it is recommended to put more effort on CRIT rate in Artifact's sub stats compared to CRIT Damage.

Xiao is a character that tends to move around the field and reduces once health with Elemental Burst. The team suggested bellow will focus on increasing the longevity of Xiao while also helping him deal more damage.

How To Use Xiao ?

Xiao's Elemental Skill has dash through enemies, dealing high anemo damage to enemies hit. With his Disolution Eon: Heaven Fall talent, its damage is further increased with each subsequent use.

Can Be Used To Reposition

The Lemniscatic Wind Cycling can be used even when Xiao is in the air, allowing for quick repositioning or dodging. It can also be used to rush forward in pursuit of enemies.

Boosts The Damage Of All Of Xiao's Attack

Xiao's Elemental Burst itself does not deal damage itself, but rather boosts the damage of all of Xiao's attacks. This means Xiao's normal, plunge, charged attack, and elemental skill during his Burst's duration would all be boosted!

Throughout Xiao's Elemental Burst, he will constantly lose health. This puts a risk to the burst when used and would require a healer for the team to constantly support him.

The biggest benefit of Xiao's burst is increasing the AOE of Xiao's plunge attack. With increased damage from the Burst, Xiao's deals high damage to all enemies within its field with every plunge!

vermillion hereafter set should be his best set as it is his dedicated set. Also it's 18% atk at 2 piece

His ascension material is wrong