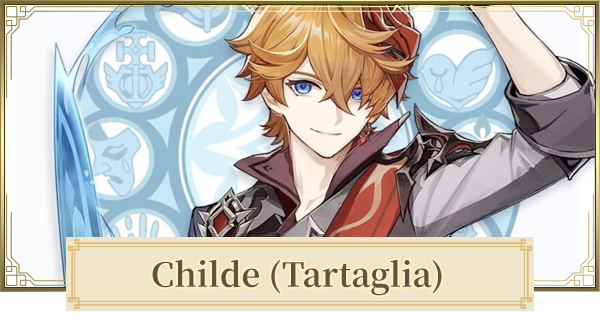 Tartaglia (Childe) excels at short term increase of damage instead of a stable one because of his powerful Elemental Burst and Elemental Skill that punishes you when you use it for a long time. This build increases the overall power of Childe maximizing his Hydro Damage enabling him to defeat enemies in a moment of time.

There are minimal damage differences over the recommended artifacts for Tartaglia. It is better to choose the ones with better sub-stat instead of focusing on completing the Heart of Depth Set.

Childe is one of the best enabler in-game. His strength heavily depends on the strength of your whole team and Childe's Synergy with it. The key to creating Childe's Team is using characters that uses skills that has an effect even if they are out of the field.

Perform up to 6 consecutive shots with a bow.

Perform a more precise Aimed Shot with increased DMG. While aiming, the power of Hydro will accumulate on the arrowhead. A arrow fully charged with the torrent will deal Hydro DMG and apply the Riptide status.

Opponents affected by Riptide will suffer from AoE Hydro DMG effects when attacked by Tartaglia in various ways. DMG dealt in this way is considered Normal Attack DMG.

Fires off a shower of arrows in mid-air before falling and striking the ground, dealing AoE DMG upon impact. When Tartaglia is in Foul Legacy: Raging Tide's Melee Stance, he cannot perform a plunging attack.

Unleashes a set of weaponry made of pure water, dealing Hydro DMG to surrounding opponents and entering Melee Stance. In this Stance, Tartaglia's Normal and Charged Attacks change as follows:

Perform up to 6 consecutive Hydro Strikes.

Hitting an opponent affected by Riptide with a melee attack unleashes a Riptide Slash that deals AoE Hydro DMG. DMG dealt in this way is considered Elemental Skill DMG, and can only occur once every 1.5s.

After 30s, or when the ability is unleashed again, this skill will end. Tartaglia will return to his Ranged Stance and this ability will enter CD. The longer Tartaglia stays in his Melee Stance, the longer the CD. If the return to a ranged stance occurs automatically after 30s, the CD is even longer.

Fires off a shower of arrows in mid-air before falling and striking the ground, dealing AoE DMG upon impact. When Tartaglia is in Foul Legacy: Raging Tide's Melee Stance, he cannot perform a plunging attack.

Perform different attacks based on what stance Tartaglia is in when casting.

Performs a slash with a large AoE, dealing massive Hydro DMG to all surrounding opponents, which triggers Riptide Blast.

When the obliterating waters hit an opponents affected by Riptide, it clears their Riptide status and triggers a Hydro Explosion that deals AoE Hydro DMG. DMG dealt in this way is considered Elemental Burst DMG.

Tartaglia's ranged mode Elemental Burst shoots out magic arrow in front of him and deals Hydro DMG and gives Shear Flow effect to enemies within the attack range. The detail of Shear Flow effect has not been announced and we'll update once we've confirmed. Tartaglia will also gain part of Elemental Energy consumed after this skill has been used.

When Tartaglia is in Foul Legacy: Raging Tide's Melee Stance, or if his Normal and Charged Attacks do CRIT DMG, they will apply the Riptide status effect on the hit enemy.

Increases your own party members' Normal Attack Level by 1.

The elemental skill of Tartaglia has a cooldown that can get very long if you stay on his melee phase. This constellation will lessen that cooldown enabling you more time to perform Melee combos.

How To Use Childe (Tartaglia) ?

Childe is the first character that can change his type of attacks with the activation of his skill. From a bow, you can switch to a melee stance to get up close and personal to your enemies.

Whenever Childe crits when he attacks an enemy while in melee stance, his unique debuff Riptide will be applied to that enemy. Riptide will cause additional Hydro damage when activated.

Hydro Applied With Every Attack

Childe becomes a Hydro enabler in his melee stance since all of his normal and charge attacks will apply Hydro.

The type of attack Childe does when using his burst will change depending on the stance that he is currently in. Both deal just about the same amount of damage, but will either apply Riptide to enemies or cause Riptide to activate when they are hit.

Childe's Burst has a high damage output on his own and even more so when dealing Vaporize. It's one of the highest damage ceiling single hit Burst damage currently in the game!

Childe is a Hydro carry and enabler. By himself, he can already deal a lot of damage, but pair him up with other characters that can proc reactions with him and you have a constant stream of damage thanks to his fast Hydro application.

Being able to switch between two stances makes Childe's gameplay dynamic. It will take some getting used to, but being able to actively switch from long-range to short-range mode is a great benefit to a team.

Excellent At Fighting Multiple Enemies At Once

Tartaglia's Riptide allows him to deal multiple hits that will have a small AOE on the opponents. When gathered, those explosions will also deal damage on surrounding enemies making Childe highly effective at battling multiple opponents at once.

Childe requires a full team of sub-dps and support to be able to show off consistent high damage numbers. You will need to not only build him, but his whole team in order to really make use of him.

Childe isn't one of those characters that you can leave unbuilt into battle since it's wasted potential. He may take some time to be good since there will be a lot of farming involved for his talents and artifacts.

Skill May Have High Cooldown

Depending on how long you use his Elemental Skill, Child could have as high as a 30-second cooldown for it. Juggling between his Melee stance and getting out of it will require a bit of getting used to, but it's needed to manage his cooldown.

Childe (Tartaglia) Reviews From Other Users

Comment or send your opinions about Childe in the comments or feedback for a chance to be featured in the article!

What Do You Think Childe's Tier Is?

11th Member Of The Fatui Harbingers

Ajax, or most commonly known as Childe (Tartaglia), the 11th member of the Fatui Harbingers. Born and raised in Snezhnaya, Childe has been in the battlefield since he was 14 years old.

One Of The Weekly Bosses

Childe is one of the weekly bosses in Genshin Impact. It is located at the Golden House in Liyue. Possible drops may contain Ascension Materials, Artifacts & Talent Level Up Materials.

How Tall Is Childe?

There is no in-game and official data regarding the height of Childe. We compared characters and Childe is Tall comparatively.

How To Get Childe (Tartaglia)?

Childe Will Have A Rerun On Version 2.2

Don't miss your chance of getting Childe Or Tartaglia on version 2.2. His banner will be the first featured banner of the version.

Characters With Same Element and Weapon As Childe

All Characters With Hydro Element

When was the last time this site was updated. The f2p team is eh and the best team is.. good but not the best. Childe's best team is him, Xiangling, Bennet and Kazuha or Sucrose. And Skyward Harp isn't even listed as one of his best weapons, which it is, and so is Aqua Simulacra.

sorry ignore my last post, em is not good on childe because he's not the one dealing reactions, my brain broke for a moment

I would choose Stringless, anon, it gives Elemental Mastery (which isn't that bad for Childe, especially if you have him on a vap team) and its pasive is pretty nice since it boosts his Elemental Skill.

@ anon probably hamayumi, seems like the best substat/pas/sive combo of the bunch for him. i actually saw a childe with a hamayumi the other day, seemed to be pretty effective!
sacrifical has no effect on his skill (i was curious so i tested it).

I need help.
I currently have prototype on Chiide and i know that this bow kinda ****s but i don't have neither Rust neither money. Wich one of these bows are better for him: Stringless, Hamayumi, Favonius or Sacrifical?