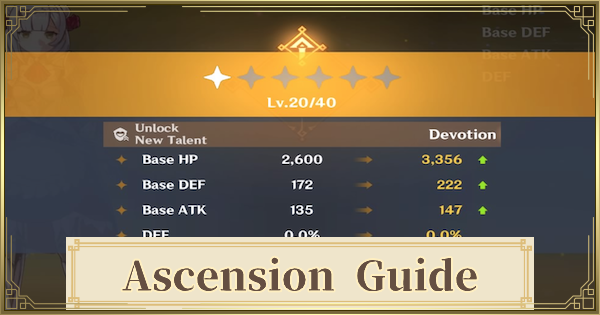 Ascending characters can also unlock one of their talents or passive skills. Many of these skills are helpful and even life-saving in high-level dungeons.

Unlike constellations, most of the items for Ascension can be collected in-game. These items can be obtained through stores, mining, and monster drops.

How To Ascend Characters? (Requirements)

You can ascend characters by going to the character selection menu and pressing the Attribute Button.

To ascend a character you need to reach a certain Adventure Rank. Take note that even if you obtained all needed materials, without reaching the needed adventure rank you cannot ascend your character.

Max Level Must Be Reached To Ascend

To be able to ascend the character you need to reach the current max level available for the character. You cannot ascend a lvl. 1 character.

Below are the common materials needed for character ascension & leveling up Talents. You may need rarer quality of items listed below as well as additional boss dropped items of the same elemental types to Ascend.

How To Ascend Weapons?

Select The Weapon From The Inventory

You can ascend weapons by clicking "Inventory" in the game's main menu. From there, select the weapon you want to ascend, level them to their max level and collect the needed materials.

Similar to ascending characters, you need to reach a certain adventure rank to be able to increase the level cap of the weapon.

How To Get Ascension Materials?

One of the easiest way to collect ascension materials is to buy them in exchange of Anemo Sigil or Geo Sigil that often drops from treasure chests.

Look For A Diamond Symbol

Some of the items for Ascension can be obtained by fighting bosses. Check your Adventurer Handbook and see the drops of bosses.

3 - Mining and Collecting in Fields

Some of the Ascension items can be obtained by simply searching and picking. Check the details of the ascension item for the location where the item usually appears.

Some ascension items can be collected by breaking stones using claymore or explosives.

4 - Use Alchemy To Craft

Some ascension items can be obtained using Alchemy. This method is useful for obtaining items that would otherwise can only be obtained by defeating high-level bosses.

5 - Buy From Traveling Merchants Or Botanists

As you explore different areas, you may encounter different NPCs which sells different local items. They sometimes have Ascension item so make sure to check what they have to offer.