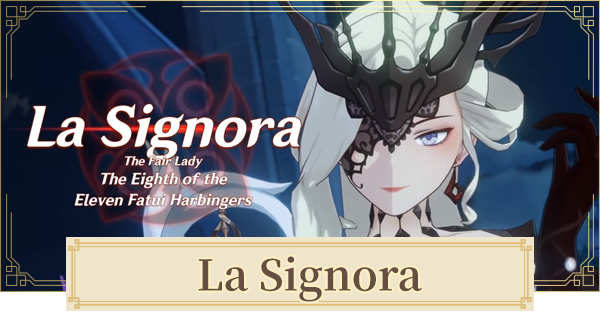 Who Is La Signora?

One Of The Fatui Harbringers

La Signora is one of the Fauti members, the 8th of the (11) eleven Fatui Harbingers and also one of the main villaines of the game.

Collecting Gnosis Of The Gods

La Signora has a goal to collect all the Gnosis of the Archons ordered by the Snezhnaya ruler, Tsaritsa. Up until now, obtaining all the Gnosis are still unknown.

In the 2.1 Update it was revealed the La Signora will be one of the weekly bosses just like Childe (Tartaglia)'s Domain, The Golden House.

Elegy For The End's Weapon Story

La Signora fits the description of the said maiden mentioned in the Elegy For The End's item story. This might explains her attitude towards Venti in the first encounter with La Signora.

As the maiden mourns over the Knight's death, the maiden swore that she will seek revenge on all the people involved in the passing of his lover. The maiden succumbed to anger, abandoning her mortal life, and eventually became the known The Crimson Witch Of Embers.

La Signora - The End Of The Crimson Witch Of Embers

La Signora appeared once again in the Omnipresence Over Mortals (Archon Quest) as she was the one behind the Vision Hunt Decree and deceived everyone including Tenryou Commission and the Raiden Shogun (Baal) about her major plan.

Farewell To The Crimson Witch Of Embers

After the Traveler and La Signora's duel, her arrogance angered the Raiden Shogun (Baal) and experienced the Shogun's wrath which makes her perished in to ashes.

Speculations Over Her Death

Some fans are speculating that her death in Inazuma is just for a show, and she will be back soon. What do you guys think? Tell us in the ▼Comments below

I really hope she comes back. She's my favorite character

Can't wait for an Urn of ashes on the next gacha