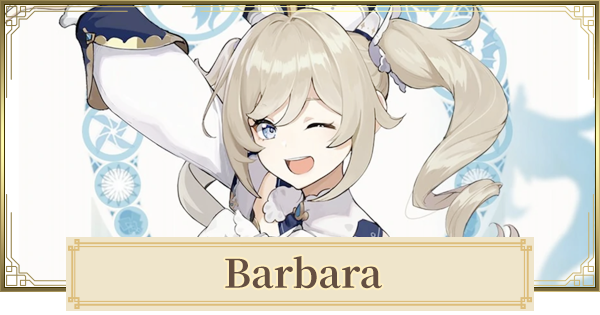 Barbara's Normal & Charged Attack, and Skill can apply Hydro which can immediately produce Dendro cores if it reacts with Dendro. Typically, only 5 Dendro cores can simultaneously exist and the succeeding Dendro cores that are produced can result in the explosion of prior Dendro cores.

Barbara's Skill can consistently restore a significant amount of HP to the active character while Burst can instantly recover a high amount of HP for everyone in the team. In addition, Thrilling Tales can provide an ATK% buff to the next character that gets switched.

Barbara has a fantastic Hydro infliction with Elemental Skill and normal attacks. The introduction of Dendro enables Barbara to produce an outstanding amount of Bloom, making her a great Bloom Bot.

Thrilling Tales Of Dragon Slayers Is Preferred For ATK Buff

With this build, Barbara is going to focus on off-field healing-per-second with Skill & strong healing with Burst and Thrilling Tales can provide an ATK buff to the next character that takes the field. On the other hand, substitute weapons can provide additional HP recovery due to a higher HP stat compared to Thrilling Tales.

Barbara is a powerful healer with a weakness of inability to produce damage using her Elemental Skill and Elemental Burst. Ocean-Hued Clam artifact is great for Barbara enabling her to deal physical damage using her skills. The substitutes are great for recovering a high amount of HP with consistency.

Barbara is great for Hydro Reactions. Since her Elemental Skill does not damage but has a high Elemental infliction making her suited for Blooms and reaction teams.

Other Characters That Works With Barbara

Barbara Guide - How To Use Barbara?

Barbara's Skill provides on-field healing, making it valuable to support your other on-field characters. This is best used for Main DPS characters who are constantly the active character.

The Elemental Skill applied Hydro to nearby enemies. You can use it to set up Elemental Reactions since it can apply Hydro to multiple enemies the whole of its duration.

Burst Healing For The Whole Team

Barbara's Burst can easily heal up a whole team since her Burst will heal every member of the party. It doesn't have any drawbacks, but it's best to use it when the party's health is below 50%.

Should You Get Or Wish For Barbara?

Barbara Is A Free Character

Barbara can be obtained upon reaching Adventure Rank 20. Her constellations can be obtained in all banners and limited banners sometimes features Barbara. While Barbara's constellation gives her more support capabilities, it is not recommended to aim for Barbara when pulling unless Barbara's rate is boosted.

Constellation 2 will not only decrease the cooldown of the Skill of Barbara, it will also give Hydro DMG Bonus to the active character making it a great character especially when supporting a Hydro Character.

The constellation of Barbara revives your fallen character and it works even in domains and Spiral Abyss.

Honestly she hits about 17-22k with the artifact burst, every 3.5 seconds. This really isnt a bad dps output. I can finally solo oceanid with her ;D

Ocean-Hued Clam set in 2.3 looks ripe for Barbra to use.