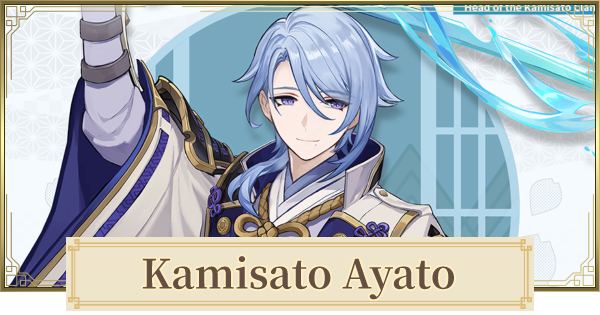 This build focuses on increasing Ayato's Normal ATK DMG which is the main source of DMG of Ayato. You need a balance of ATK and CRIT stats for this.

This build solely focuses on increasing the DMG of Ayato's Burst DMG. Energy Recharge is crucial because of the high burst cost of Ayato.

Since Ayato has a high Burst Cost, it is important to increase Energy Recharge to be able to easily unleash Elemental Burst.

Since you will need to make as much damage as you can, it's important to build CR/CD while also building ATK and Hydro DMG. You can build a bit of Elemental Mastery or Energy Recharge, but they're low on priority.

For Burst focused Ayato, it is important to have at least 180 to 200 Energy Recharge for a consistent uptime of Elemental Burst. Noblesse Oblige 4 piece is great if there are no other Noblesse holders since the buff from the artifact does not stack.

Ayato can work either as a Main DPS or Support. He is a very flexible unit because of the hydro element and he can fit really well in various team comps such as Vape, Permafreeze, Bloom and Taser comps.

Other Characters That Works With Ayato

Ayato Guide - How To Use Ayato?

If You Plan To Use Swirl, Start With Elemental Burst

Upon using Elemental Skill, the damage that Ayato's normal attacks will become Hydro AOE slashes that has an additional HP scaling. You will also gain resistance to interruption.

The Hydro Shadow Does NOT Attract Enemies Agro

Despite how it looks, the reflection that Ayato will leave upon using the skill will not attract enemies' attention. However, it can explode and deal Hydro damage. It will also increase the buff from Elemental Skill when destroyed.

Ayato's Elemetal Burst gives consistent Hydro Damage at a large AOE. It has a similar range to Ganyu's skill. People who plan to use Ayato as a support or Sub-DPS should focus on making his Elemental Burst strong.

All characters that is within the AoE of Ayato's Burst will have an increase in Normal Attack damage. The increase depends on the Talent Level. This is great for supporting and increasing the damage of Normal Attackers such as Yoimiya, Childe and Ayato himself.

Should You Get Or Wish For Ayato?

Ayato is a strong & flexible Hydro DPS. With his elemental burst, can increase the normal attack DMG of characters within its range. He can perform swift Hydro attacks and he becomes even more deadly when paired with supports like Yun Jin & Bennett. Ayato is initially good and his constellations make him even better but it depends on your prioritization.

Ayato's Wave Flash stack count is increased to a maximum of 5. It also increases Ayato's Max HP by 40%, which increases the damage of his skill and burst.

C4 can increase the Normal Damage of nearby characters by 20% for 10s (excluding himself). This is great if you want to use Ayato as an Off-field support.

How much does his Burst increase NA damage if his talent level is maxed, not counting cons? Is it more than say, Yunjin c2, or Thoma c6?

Ayato is SS tier, srsly needs to be changed. The game has equal characters and if you build them correctly they all have potential to be SS.

He is the best! Handsome, rich, strong. Ayato is a really OP DPS. People talking bad about him because he is a male character and not a wifu. Haha