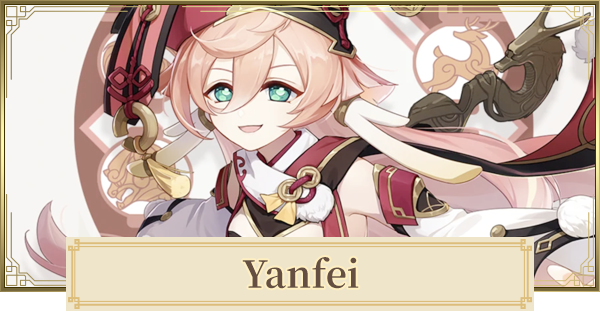 Yanfei has powerful Pyro infused Charge Attack which will be the main source of her DMG. This build focuses on powering up that Charge attack with Elemental reactions.

Use EM Sands For Reaction Teams

You can opt to use EM sands if you plan to put Yanfei in a reaction-focused team. You can use the 4-pc Crimson Witch of Flames for overloaded comps.

Yanfei is a DPS that can inflict Pyro easily making her able to deal constant Elemental Reaction. This team maximizes and support the damage from those Reactions.

Shoots fireballs that deal up to three counts of Pyro DMG.

When Yanfei's Normal Attack hit enemies, they will grant her a single Scarlet Seal. Yanfei may possess an maximum of 3 Scarlet Seals, and each time this effect is triggered, the duration of currently possessed Scarlet Seals will refresh.

Each Scarlet Seal will decrease Yanfei's Stamina consumption and will disappear when she leaves the field.

Consumes Stamina and all Scarlet Seals before dealing AoE Pyro DMG to opponents after a short casting time. This Charged Attack's AoE DMG will increase according to the amount of Scarlet Seals consumed.

Gathering the power of Pyro, Yanfei plunges towards the ground from mid-air, damaging all opponents in her path. Deals AoE Pyro DMG upon impact with the ground.

Triggers a spray of intense flames that rush at nearby opponents, dealing AoE Pyro DMG, granting Yanfei the maximum number of Scarlet Seals, and applying Brilliance to her.

Has the following effects:

The effects of Brilliance will end if Yanfei leaves the field or falls in battle.

When Yanfei consumes Scarlet Seals by using a Charged Attack, each Scarlet Seal will increase Yanfei's Pyro DMG Bonus by 5%. This effects lasts for 6s. When a Charge Attack is used again during the effect's duration, it will dispel the previous effect.

When Yanfei's Charged Attack deals a CRIT Hit to opponents, she will deal an additional instance of AoE Pyro DMG equal to 80% of her ATK. This DMG counts as Charged Attack DMG.

Displays the location of nearby resources unique to Liyue on the mini-map.

All Catalyst characters suffers from huge stamina needed to deal Charge Attack. With the constellation 1 of Yanfei, you can reduce that stamina needed depending on the number of Scarlet Seals you have.

How To Use Yanfei ?

Yanfei's Elemental Skill deals with a burst of AoE pyro damage to nearby opponents. If an opponent was successfully hit, Yanfei will gain three (3) Scarlet Seals that will buff her Charge Attack.

Yanfei's Elemental Burst deals with a rapid intense flame towards the enemies that deals with AoE Pyro DMG. Her burst also instantly giving Yanfei a complete stack of her Scarlet Seals.

Yanfei heavily relies on her strong Charge Attack that deals constant AoE DMG, thus it can be easily buffed. Her Elemental Skill & Burst has a quick cool down that can be quickly triggered while in combat.

Her charge attack has an amazing damage that is buffed by her Scarlet Seals. It increases according to the number of Scarlet Seals consumed.

All Attacks Are Pyro

Yanfei can easily apply Pyro element in the field which is a good thing for elemental reactions.

Burst Is Not In Long Range

Yanfei's Elemental Burst deals damage that is not in long-range as opposite to her normal attack, but you can take advantage of her quick CD so that you can constantly give damage towards the enemies in the field.

Charge Attack Uses Too Much Stamina

Because Charge Attack is the main source of damage, you will often have no stamina making Yanfei vulnerable to dodging enemy attacks, however, if you have her up to C4 you can use her shield skill in order to tank damage from enemies.

Yanfei Reviews From Other Users

What Is Yanfei's Tier For You

Yanfei is labeled as the top legal expert in Liyue. She is fully versed in every area of the law, from commercial litigation up to civil mediation and criminal lawsuits, you name it! Yanfei will guarantee you a smooth and satisfactory on every case she will handle.

Half Adepti, Half Human

Yanfei's father is an Adeptus, and her mother is a mortal. She was born during the peacetime in Liyue, she stated in one of her voice lines that she didn't signed any contract coming from Rex Lapis and thus she enjoys life on how she wants to live.

How Tall Is Yanfei?

There is no in-game and official data regarding the height of Yanfei. We compared characters and Yanfei is Medium comparatively.

How To Get Yanfei?

Get Yanfei Through Wish Banners

Yanfei doesn't have her own character wish banner, however you can still obtain Yanfei through these permanent banners: Wanderlust Invocation! and Beginner's Wish.

Obtain Yanfei Through Other Character Banners!

You can also get a chance to pull Yanfei through other characters' banners. Drop rates for Yanfei will be boosted depending on the banner.

The rate of Yanfei is boosted at the following wish banners.

Characters With Same Element and Weapon As Yanfei

Yanfei/Raiden/Kokomi power team 4th is irrelevant u will barely need them. But I use Zhongli. Yw

If you need shields, Noelle or Diona are valid F2P options

i have a royal grimoire on her, works very well! she does 20k+ crits on her strong hits. (melt/vaporize, but still)