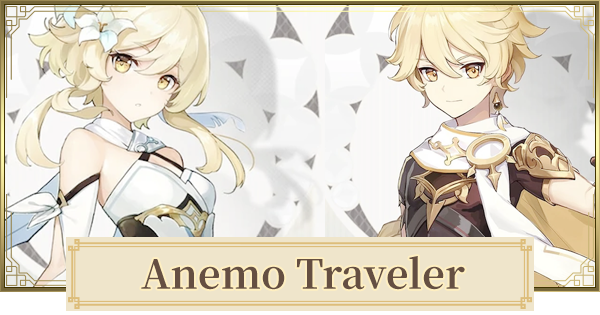 Anemo Traveler is a great Free-To-Play Anemo Support that every players have. This build focuses on increasing the damage of Swirl and providing debuff using Viridescent Venerer.

While ATK% will give higher personal damage, when using Anemo Traveler as a support Elemental Mastery will give overall higher damage because of how Swirl works. This is especially when dealing with multiple enemies at once.

Grasping the wind's might, you form a vortex of vacuum in your palm, causing continuous Anemo DMG to enemies in front of you.
The vacuum vortex explodes when the skill duration ends, causing a greater amount of Anemo DMG over a larger area.

DMG and AoE will gradually increase.

If the vortex comes into contact with Hydro/Pyro/Cryo/Electro elements, it will deal additional elemental DMG of that type.
Elemental Absorption may only occur once per use.

Guiding the path of the wind currents, you summon a forward-moving tornado that pulls objects and opponents towards itself, dealing continuous Anemo DMG.

If the tornado comes into contact with Hydro/Pyro/Cryo/Electro elements, it will deal additional elemental DMG of that type.
Elemental Absorption may only occur once per use.

The last hit of a Normal Attack combo unleashes a wind blade, dealing 60% of ATK as Anemo DMG to all opponents in its path.

Palm Vortex kills regenerate 2% HP for 5s. This effect can only occur once every 5s.

How To Use Anemo Traveler ?

Small enemies can be picked up when you hold on your Elemental SKill. This can be a quick way to crowd control small mobs and throw them back to either give yourself breathing space or apply Swirl.

All enemies caught in the Anemo Traveller's Elemental Skill will be hit multiple times and will cause Swirl against all of them. Use this for a quick way of spreading an Element to multiple enemies.

The Anemo Traveler's Elemental Skill is on a relatively small cooldown. You can quickly tap it against an enemy to get enemy particles to charge your Elemental Burst.

Use Of Anemo Traveler's Elemental Burst

The Anemo Traveler's Burst is basically a Tornado that will pick up an element on the field and spread it to enemies it hits. Same as the Elemental Skill, this is a good way of spreading an element against multiple enemies.

Pick Up Enemies To Gather Them

Small enemies will also be picked up by the Elemental Burst. They'll be carried for a small distance so you can create space in the battlefield using it.

The main advantage of the Anemo Traveler is their ability to easily crowd control small enemies using either their Elemental Skill or their Elemental Burst. Although, this is limited to just small mobs.

When it comes down to it, the Anemo Traveler is a reliable Anemo Support or Main DPS depending on how they are built. They're not the strongest, but they will get the job done.

The Crowd Control of the Anemo Traveler is reliable, but it lacks the benefits or DPS that other Anemo characters could provide. This makes it easy to replace them in team comps.

Anemo Traveler Reviews From Other Users

Comment or send your opinions about Anemo Traveler in the comments or feedback for a chance to be featured in the article!

What Do You Think Anemo Traveler's Tier Is?

The Main Protagonist Of The Game

The Traveler is the main playable character in Genshin Impact. Choose between the twins: Lumine & Aether and start your journey to explore the world of Teyvat together with Paimon!

Resonate To Other Element

The traveler/player can resonate itself to any Statue of the Seven. Same goes to the other nation if you want to acquire or resonate with their element.

How Tall Is Anemo Traveler?

There is no in-game and official data regarding the height of Anemo Traveler. We compared characters and Anemo Traveler is Medium comparatively.

How To Get Anemo Traveler?

the anemo traveler is great with a gassy group cause she can blow away all the farts. one of the best chars imo

It may be the Sword of Descension's + 66 attack but I actually deal A LOT of damage with Anemo Traveler.
For artifacts, I have 2 +18% damage and around 130 elemental mastery. Looking for an Anemo damage, but haven't been finding it.

Instead of putting useless information like "How tall is the traveler?", put the best team as you said in the description of this guide