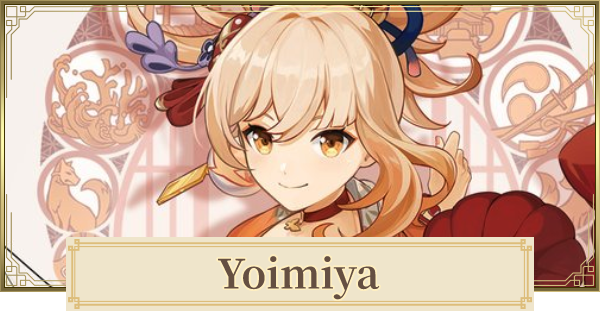 For an On-Field DPS Build, it's essential to have weapons that will have either Crit Rate, Crit DMG, or ATK% as their main stat. Thundering Pulse is the best for Yoimiya, but any other stat stick will also work.

Since you will need to make as much damage as you can, it's important to build CR/CD while also building ATK and Pyro DMG. You can build a bit of Elemental Mastery or Energy Recharge, but they're low on priority.

Other Characters That Works With Yoimiya

Notes About Team Comps For Yoimiya

Yoimiya is restricted to only a main DPS role so when building a team, you will need to build around her. She needs supports that can place down on-field abilities so that she can continue to stay on-field and deal damage.

Yoimiya Guide - How To Use Yoimiya?

Yoimiya has a powerful Normal Attack and this is further increased by her Elemental Skill that infuses pyro to normal attack and boosts its damage depending on the skill level.

Third & Final String Of Attack Deals The Most Damage

While her Elemental Skill is active, the Third and last String of Yoimiya's normal attack sequence will deal the most damage. It is ideal to continue attacking to complete the sequence instead of going in and out of it.

Yoimiya will shoot an arrow towards an enemy marking them with a fireworks mark. If a teammate hits that mark, it will explode releasing a small AoE of Pyro DMG. It also boosts the ATK of teammates around it making it a great support skill.

Should You Get Or Wish For Yoimiya?

Pull If You Need A Ranged Pyro DPS

Yoimiya is an agile Pyro DPS that can fight from a distance. With her Elemental Skill, she infuses her normal attacks with Pyro, further increasing her damage. Her strength and weakness lies in her being single-target focused, however.

Constellation 2 For Increase In Pyro DMG

Yoimiya gets a good increase in her DMG with Constellation 2 since it increases her Pyro DMG whenever she crits. Since you're building her with CR/CD anyways, this is a good passive buff.

Yoimiya shines in Boss floor, especially versus Flying boss.
But when fighting >2 enemies, ....she rekt.
I mean she take longer duration to finish that abyss floor.

Last stack of Thundering pulse clashes with 4pc Shimenawa. Either use both and build a Team around it or swap the weapon or artifact set .

38> echos does more damage with lower stats than shime

uhh i dont think echoes is the best set for yoi, especially when u have high ping. its also a gamble which is so bad compared to shime for a significant dmg