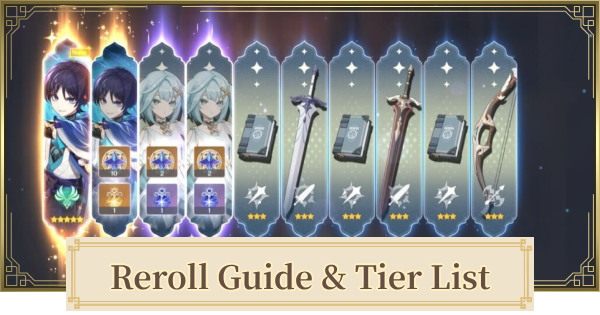 We Are Now Accepting Votes For Popularity Poll 2.7
Vote your favorite Character, DPS and Support for version 2.7 > here <!

Some characters are available year round while some can only be obtained during a limited-time. This tier list puts more importance in characters that you are not readily available.

When rerolling, it's best to get the best characters before stopping. Tier list is based on a character's overall strenght, utility, and ease of use.

Since this is a Reroll Tier, characters you can get for free are placed lower while characters with high rarity or valuable constellations are favored.

Goal Of Getting A 5-Star Character

This tier list also takes into account the uniqueness of a character when it comes to their role and overall kit. Some characters are the only ones in their class, like Eula being the only Physical 5-star carry and should take priority.

Reroll Based On Your Preference

At the end of the day, whether you reroll or not is influenced with how you like the character personally. If you got the character you wanted, then there's no need to reroll.

Grayed out characters cannot be pulled in the current banners. They may come back in future banners, but for now are unavailable.

Characters that can be gotten for free, including Xiangling and Noelle, are lower than their supposed ranks. This is due to it being a waste to get them in your reroll when you can get then later on for free.

Your goal when rerolling in an Event Banner is to get the featured 5-Star character. If you do not personally like the featured banner characters, it's best to wait for another banner to reroll in.

How To Reroll Guide

A "reset marathon" in Genshin Impact takes a really long time to get through, and you don't even get that many wishes to compensate. Of course getting a ★5 is incredibly useful, but we don't recommend spending too much time trying to do this.

Check Out How To Reroll Fast Here!

To be able to reroll, you need to create another account and follow the procedure above once again.

You can create an account in miHoYo's official website using only a Username. This would be an easier way of creating an account since it does not need email verification.

Check Out How To Reroll Fast Here!

Will I Be Banned For Rerolling?

You will not have to worry about being banned for performing rerolls, as long as you performing them for your own sake and are not selling accounts. Rerolling abides by the rules and regulations set out by Mihoyo, so you can rest easy!

the 2nd mail that give another 10 wishes is gone ?

lisa, kaeya and amber are the rarest characters (because they are only available on standard banner),
if you plan to play for a long time and got them, do not reroll

I think in Standard 5* characters ranking you should move Mona tier higher and Diluc tier lower based on current meta and powercreep.

By "reroll", they mean starting the game over with a new account.

I'm new to gacha (except IRL), it would be nice to explain the meaning of reroll ?