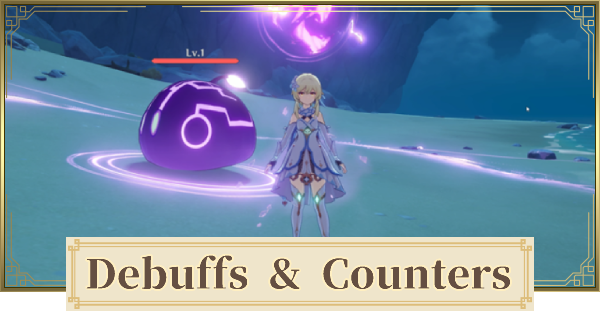 Genshin Impact
All Debuffs List - How To Cleanse & Counter

Learn about Debuffs and their effects in Genshin Impact. This guide includes all debuffs, their effects, cleanse abilities, how to remove, cleanse, & counter debuffs, and more!!!

What To Do? Tips & Tricks For Beginners

The opposite of Buffs, Debuffs applies a harmful status effect to affected characters. It puts players at a slight disadvantage and can even cripple a team if not dealt or countered.

There are multiple types of Debuffs in Genshin Impact with their own effects. Debuff effects range from something simple like increasing cooldowns or complex wherein the whole team will lose health while the debuff is active.

Some Can Be Cleansed

Besides waiting for the Debuff to lose effect, some debuffs can be completely removed by using cleansing abilities from different characters. Do note that not all debuffs can be cleansed.

Bypasses Shields And Cannot Be Cleansed

Even if your character is shielded, they will still get Corrosion if an attack by a Rifthound or Rifthound Whelp connects. It also cannot be cleansed by any character ability.

Counter By Having A Healer On The Team

The easiest way to survive against Corrosion is to have a healer on your party. Burst, multi-target healing is prioritized since it can outheal the damage done by Corosion.

Remove By Staying Near A Fire Source

The only way to get rid of Sheer Cold is by staying close to any type of fire source. Use any of the warming stones, orange Seelie, campfire or torch to get warm. Setting yourself on fire will not work.

Can Be Outhealed By Some Healers

The damage done by the Sheer Cold can be outhealed by some healers. Characters that have abilities on low cooldown that can continuously heal you are recommended for this.

Use Eyes Of Frost To Control Blazing Heat Accumulation

Since Blazing Heat is currently exclusive to the La Signora boss fight, there's only one way to get rid of it. Stay near the Eyes of Frost in the corners of the room where you fight Signora to control its accumulation.

Being Shielded Helps Against Being Stunned

There's no real way to stop being stunned besides completely dodging the attack, but having a shield helps in negating damage while being stunned. A shield does not prevent being stunned.

Using specific skills that procs Elemental Reactions on yourself will cleanse the Slowing Water Debuff. The most effective ones to cleanse it with is Bennett's and Jean's Elemental Bursts.

Can Be Cleansed With Elemental Reactions

Causing Overload or Superconduct on yourself will cleanse your active character of the Engulfing Storm debuff. Diona, Bennett, Xinyan, and Thoma should be good for getting rid of it effectively.