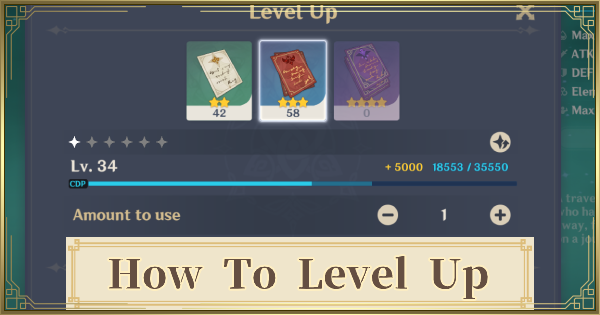 Genshin Impact
Leveling Guide - How To Level Up Characters

Check out how to level up characters fast and level up priorities in this guide. This includes leveling guide, ascending characters, character priority, and more!!!

The best way to level up your characters is through the use of Character EXP Materials. You can get them from quests, defeating elite enemies, and from chests around the world.

Although you do get EXP points for defeating enemies, it's very little compared to what you get from using Character EXP Material.

Blossoms Of Revelations are the most consistent and efficient way to get Character EXP Materials. The enemies they spawn are fairly easy to beat and players are guaranteed to get them once beaten. These do cost Original Resin to open, however.

Level Up Priority - Who To Level Up First

Prioritize characters who are the strongest. This includes S-Rank and A-Rank characters as they will help you out well even in endgame. Try to limit the characters that you will max out to 2 in case you get a better pull later.

Train characters with higher priority if you don't have anyone to replace them with. Try not to invest in them so much though, as you could switch them later on for another character.

Benefits Of Leveling Up

You can further increase the level cap of your character by ascending them. However, to do this, you character must reach their current level cap first. Ascending will also increase your stats.

Would be good to know how much experience/materials is required for each ten levels.