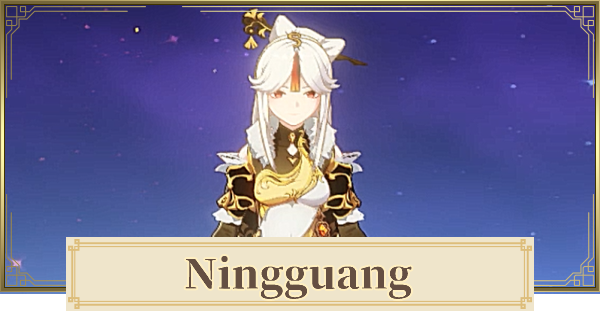 Should You Pull For Ningguang ?

Ningguang is a Geo DPS that can deal constant damage with her normal & charge attacks. Ningguang's constellation significantly improves her abilites & damage output. If you main her, it is recommended to pull for her constallations.

Constellation 1 Fix The Lack Of AOE

Ningguang, with no constellation, has a problem of being too single target. Constellation 1 makes the stone from the Normal attack of Ningguang to explode and hit multiple enemies at once making her a more effective main DPS.

Ningguang has a great elemental burst that can deal huge single-target damage. This build focuses on quickswapping Ningguang once she has unleashed her abilities.

This build relies on Ningguang being on-field most of the time as the main carry. This enhances the damage output of Ningguang's normal and charged attacks.

Ningguang is an amazing DPS that deals constant Geo DMG to enemies far and close. Her DMG mostly came from her powerful charged attacks. This however limits Ningguang's movements. Further enable Ningguang enabling her to demolish enemies.

How To Use Ningguang ?

When a character pass through the veil of Ningguang's Elemental Skill, they will receive Geo Damage bonus. This is a set-up ability and should be used before going on the offensive.

Creates A Protective Veil Against Projectiles

Besides the Geo buff, the veil will also protect characters from incoming projectiles. However, because the Skill can be destroyed, this is not a reliable way of escaping enemy attacks.

Ningguang's Elemental Burst is a purely offensive ability. Unleash it as much as you can with the right set-up to get the most of its damage.

At Constellation 6, Ningguang's Elemental Burst will create 6 Star Jades that will greatly increase the damage of your next charged attack through its raw power.

Normal Attack & Charge Attack Is The Main Source Of Damage

When using Ningguang as a DPS, most of the damage will come from the combination of Normal Attacks and Charged Attacks.

Every Normal Attack that hit the enemies will create Star Jades. You can unleash these jades by using Charged Attack.

there are atk% in the the atk% clock's substats,
and ning don't need EM.

Amber? I think not

I thought so too, the gladiator 4 piece set is useless for ningguang as she use catalyst. Sojourner 4 pice set would be better.