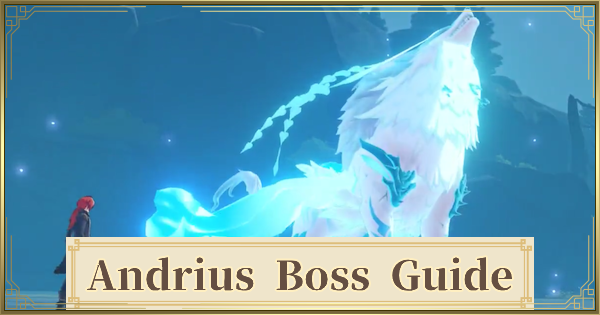 Andrius (Wolf Of The North Challenge) is a boss in Genshin Impact. This guide includes how to unlock, drops, reset and respawn time, coop, rewards, lupus boreas guide & teams.

Andrius - Boss Location & How To Unlock

The player must raise their Adventure Rank and finish the story quests until the end of Prologue - Act III.

After finishing the Prologue - Act III quest, heading to Mondstadt will reveal Amber's Storyquest. Follow through the story to unlock Raven's Story Quest.

Finish part 1 of Razor's Story to unlock Andrius. After unlocking Andrius, there will be an icon revealed at Wolvendom which locates the Boss area.

You can team up with friends or random people to battle Andrius.

Rewards Can Only Be Claimed Once A Week

Even if you are helping other players in this boss, you cannot claim rewards if you are already done claiming this week's reward.

Having two Pyro in the team would trigger an elemental resonance that will boost your attack by +25% . The boss is also a Cryo element monster so it is better to have a Pyro as a DPS.

Noelle is a really tanky character that can provide shields to character and also support heal. Switch to Noelle when you are unable to dodge Andrius' Attacks.

Check Out All Free Characters Here!

Like the previous team, having Pyro Resonance is recommended. It increases attack and also decreases the effect of Cryo Element.

Andrius is a Cryo monster who is at times in Cryo status. Attacking the boss with an electro attack would make it more vulnerable to physical attacks.

Some food has stat boosting effects that would make battle against Andrius easier and faster.

Most of the attack of Andrius deals Cryo damage. Consuming Frostshiled Potion greatly decreases the attacks.

The boss stops for a long period of time after every attack. Use that chance to deal damage instead of actively chasing the boss.

Do Not Move Too Faraway From the Boss

Most of the attacks of the boss are more difficult to dodge the farther you are from the boss. Try to stay close to the boss if possible.

Andrius is immune to Cryo and Anemo moves. Attacking it with moves would not deal damage.

Make Use Of Elemental Burst And Sprinting

After using Elemental Burst or sprinting, your character will not be affected by attacks for a second. Use them to dodge strong one hit attacks.

Andrius will release Cryo energy freezing the floor around him that deals constant Cryo damage afterwards he will swipe the area with its tail dealing a significant amount of damage. Walk away from the boss to dodge and move closer to deal damage .

Andrius will run towards you dealing damage and leaving the floor frozen for a few seconds. To dodge, sprint the last second to the side.

The floor below your character will be frozen, afterwards Andrius will jump towards that location. Once the floor starts freezing, run away from that area to dodge the attack.

The boss will use its claw to attack everything in front of it. While the damage it gives is not significant, it inflict cryo element to the character. To dodge, move away or sprint to the back of the boss.

The boss will run around the field and will try to tackle you multiple times. During this time, damaging the boss is near impossible so focus on dodging.

To dodge, sprint towards from the direction of his attack the second the boss is close to you. Sprinting will give you a second of invincibility so you will not take damage. This will end in jump attack so dodge it the same way you dodge Andrius's Jump attack.

Once you decrease the boss' Health to 50% and below, he will change into his Anemo phase wherein most of his attack will be mixed with Anemo element. His attack pattern is similar to the previous phase but faster and more frequent.

The boss will freeze the floor in front of him and will launch an series of ice spikes on that path with its claws. To dodge, move away from the frozen floor.

Upon changing to Anemo Phase, the boss can summon Icicles that deals damage. Before it falls, the ground wherein it will hit will be frozen so move away that area to dodge.

The boss will summon several wolves jumping towards you dealing small cryo damage. The damage is small so it is better to just focus on damaging the boss but take note that this attack inflict cryo status.

@Anonymous "barb as a healer for this fight? really? to get perma freezed?"

That's the line up with just the free, basic characters. Barbara should work out fine, if you only use her Elemental Burst. That doesn't wet the party, so it should be OK.

The title for the Rewards section says Stormterror instead of Andrius

Andrius got new attack. Now he summons crystals and shoots them

Really recommended Qiqi as a healer when cryo is useless against Boreas.

I beat him just using Noelle. Mostly stood between the legs/under the belly and attacked the front legs.

If I hit his nose he went beserk and jumped back to attack. Just staying under his belly takes longer probably but far less damage to your character.