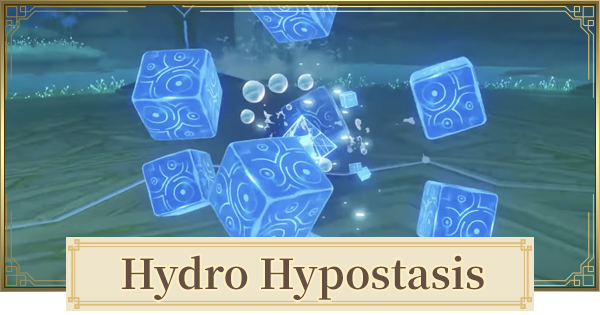 Made out of pure Elemental energy, the Hydro Hypostasis is a being made of pure Hydro. It has the same cube shape as the other Hypostasis, but in a blue coloring to match its element.

Hydro Hypostasis was added as part of the 2.1 Update. You can immediately head to its location and fight it once you've updated to the 2.1 version of the game.

Hydro Hypostasis Location & How To Unlock

Hydro Hypostasis - How To Unlock

Although the Hydro Hypostasis is not necessarily locked behind any quest, it does require players to have access to Inazuma. To do so, you will need to progress through Archon Quest Chapter 2 Act 1.

The Hydro Hypostasis is found within Watatsumi Island. It's not out in the open and you will need to enter through a specific ridge to get to it.

* Tap the photo to learn more about the material.

Like any other world boss, Players will have to use Resin in order to collect rewards from beating the Hydro Hypostasis. You can clear this boss as many times as you want in a day, but each reward collection will require 40 Resin.

Characters That Use Materials From Hydro Hypostasis

So far, the only character that will use materials from the Hydro Hypostasis is Kokomi. There's a possibility that future characters will also use up materials from it for ascension.

Recommended To Have Pyro & Electro On Team

The Hydro Hypostasis is vulnerable to both Pyro and Electro since Vaporize and Electro-charge deals a ton of damage. Since Vaporize has a higher damage potential, your main DPS should be one.

Have Characters With High Elemental Up Time

During the fight against the Hydro Hypostasis, you will need to defeat slimes with Elemental Reactions to prevent it from regenerating. It's better to have characters that can dish a ton of elemental damage than ones that rely on Physical Damage.

This free team comp is composed of characters that players could get for free. Xiangling, Beidou, and Fischl should be enough to cause major elemenetal damage against it.

Defeat Slimes Around The Arena

During the fight, slimes will appear around the arena. Do not ignore them since they can heal the Hydro Hypostasis. Make them your top priority when they show up.

Use Elemental Attacks Against Water Droplets

The Droplets can easily be defeated when using Elemental attacks against them. Note that Cryo does not freeze them at all.

When the Hydro Hypostasis surrounds itself with hydro, stay a few steps away from it. This attack will burst, damaging everything around it in a circular range.

Stay In Between Of Rolling Cube Attack

The Rolling Cube Attack does a ton of damage since it will damage you continuously. Escape from it by running towards the Hydro Hypostasis.

The Slam Attack create ripples in front it. To avoid it, it's best to dash to the left or right instead of backwards.