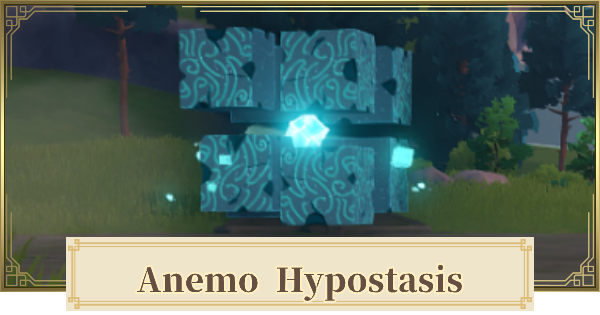 Defeating the Electro Hypostasis will give you a chance to get Artifacts and special enhancement materials. The higher your World Level, the better the rewards will get!

This party will provide you with a well-rounded team, as well as the Protective Canopy Elemental Resonance, giving you 15% elemental resistance.

Trigger A Reaction With Lisa & Barbara

Anemo Hypostasis naturally has the Anemo (wind) element on it at all times, which means that Lisa and Barbara's regular attacks will trigger a reaction! As soon as it becomes vulnerable, you can deal huge damage with just regular attacks.

Your main DPSers for this should be Lisa and Barbara, as Kaeya and Xiangling might take some time to reach the enemy. Use their skills for reactions when you're already in close range, but rely mainly on your Catalyst users to DPS from afar!

This party also features 2 Pyro users to trigger the +25% ATK Resonance buff. The key here is regular cycling between characters to trigger as many reactions as possible!

Set Up Elemental Skills And Combo

Use Fischl and Qiqi's Elemental Skills then quickly switch out to Diluc to trigger multiple very powerful elemental reactions. Electro, Cryo, and Pyro will cause Spread, dealing huge damage.

Stick With Fischl If You Can't Get Close

There are times when you're particularly far from the boss and can't reach it in time to use melee attacks - in this cases just stick with Fischl to get some damage in!

Attack When The Core Is Exposed

Dealing damage while the cubes are around the Hypostasis core won't do anything - the cubes will periodically leave and give you an opening to strike. Don't waste your time attacking it while it's protected!

Prevent It From Healing

Once the boss's HP gets low enough, it will spawn 4 energy balls in the air. If you don't clear these in time, the boss will absorb them and heal. Use the wind currents nearby and glide into all orbs to prevent this! This is extremely high priority, so don't neglect to do this.

Move Away From Tornadoes

One of the Anemo Hypostasis's abilities is to summon quite a few tornadoes. You can stay in range and try to dodge them, but it's often just less of a hassle to run out far away until they disappear.

Though it might go without saying, don't use Anemo (Wind) abilities against this boss. It is completely immune to them!

One of the Anemo Hypostasis's attacks will involve it sucking in air in front of it, then exploding after a short duration. If you're outside of the circle, you won't be sucked in and can deal damage at range, so move out quickly!

Launches Into The Air

This is a two part attack where the boss will fly up in the air and then use a vacuum wave. If you get hit by the launch up, the second part of the attack will always land, so make sure to carefully avoid the first part.

Drops Cubes From The Air

The boss will drop 3 cubes on you from up above. There's an indicator where they will drop, so just dash away from them.

The boss will fire out 3 cubes in your direction. They will follow you, but it's possible to dash away from them once they're fired to avoid them.

The boss tries to clamp down on you by forming wings/hands out of its block and attacking in front of it. As soon as you this animation form, it's possible to dodge by just running back or the side.

The boss spawns several tornadoes around the arena. They won't follow you very far, so you can simply move away to the edge to avoid them.

The boss absorbs elemental energy orbs levitating in the air and sends out a powerful shockwave. There are 3 waves to this. This is avoidable by running out of range!