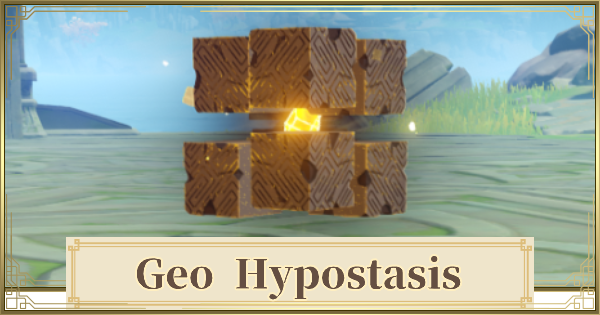 Defeating the Geo Hypostasis will give you a chance to get Artifacts and special enhancement materials. The higher your World Level, the better the rewards will get!

Make Sure To Have A Claymore User

Since the Geo Hypostasis continuously summons multiple rock pillars, it's best to have a character that uses a Claymore to quickly get rid of them.

This party is set to deal as much damage as possible with their basic attacks and combined elemental attacks. Use Noelle to destroy the pillars and use the other members to focus on the Geo Hypostasis.

Utilize Superconduct With This Party

Even if you're fighting a Geo enemy, you can still use other elemental combos against it. Use Superconduct with Kaeya and Lisa to lower its overall defense.

Focus Noelle On The Pillars

Noelle should be focused mainly on the Pillars that will spawn around the arena. Since she's a Rock element, it is hard for her to DPS so she's better off against the pillars.

This party also features 2 Pyro users to trigger the +25% ATK Resonance buff. The key here is regular cycling between characters to trigger as many reactions as possible!

Set Up Elemental Skills And Combo

Use Fischl and Qiqi's Elemental Skills then quickly switch out to Diluc to trigger multiple very powerful elemental reactions. Diluc's high DPS is further heightened with the DEF reduction.

Use Diluc To Defeat Pillars

Using Diluc's basic attacks, take down the Pillars. This is much easier for him since he uses a claymore.

Attack When The Core Is Exposed

Destroy the rock casing around the Geo Hypostasis to expose its core. When its down, aim to deal as damage as you can before it creates another rock shield.

Aim To Destroy The Pillars Around The Area

When you destroy all of the pillars, the Geo Hypostasis will fall to ground with its core exposed. This is why taking down the Pillars are a must.

Once the boss's HP gets low enough, it will spawn 3 rock pillars. If you leave them alone, it will regenerate almost half of its health. Take down as much as you can with your Claymore-using character.

Create A Barrier To Keep Safe From Earthquake

When the Geo Hypostasis starts to rumble and create earthquakes, you can destroy one of the floating rocks to create a pillar around you. This will save you from damage and give you an opening to destroy the pillar.

Run To The Edge If You Can

If you can't create a barrier, the next best thing to do is to run to the very end of the arena. Generally, the earthquakes will not reach you from out there.

Do Not Use Geo Abilities

Against the Geo Hypostatis, Geo attacks are useless. It's better not to use them here.

The Geo Hypostasis create 4 pillars. If you near them, you will take damage. Destroy them all, but note that they will eventually respawn.

The Geo Hypostasis will become a solid cube that will fall to ground and create a continuous earthquake or shockwave. Stay away from it to avoid all damage.

Taking the form of a Hammer, the Geo Hypostasis will slam on the ground, creating a small shockwave around it. Avoid sideways with a dash to escape it.

Magic seals will appear from the sky and from them rocks will fall around the Arena. Move around to avoid them falling at you.

The Geo Hypostasis will fling rock fragments at you from a distance. It's semi-homing and will come after your character's location.

The Geo Hypostasis will create two walls around it which it will them slam together to attack you. It has a windup so you can avoid it by dashing out of its range.

In my opinion it is better to use a Кazor. Цith his ult, he will have time to break all 3 pillars at the end in 1 tun. Also want to add: Zhongli elemental skill deal damage to pillars.