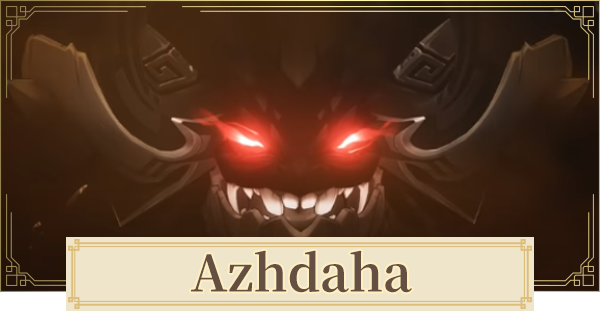 An Ancient Monster Sealed Away

Azhdaha has ancient roots, stating how he was connected to the Ley Lines and had been sealed away from humanity. He looks similar to the Geovishaps with his size close or bigger than the Primo Geovishap.

Check Out The Primo Geovishap Guide

Azhdaha will be added as the newest weekly boss. Along with Childe, Stormterror, and Andrius, complete their challenges once a week and collect the rewards in exchange for Resin!

Azhdaha will be released alongside Zhongli's banner rerun. This might be directly connected to Zhongli's Second Story Quest before encountering Azhdaha's quest.

Azhdaha was added to the game as part of the 1.5 Update. This includes its introductory quests and subsequent Weekly Boss location and domain.

Azhdaha can be challenged after you finish Historia Antiqua Chapter: Act II - No Mere Stone. This boss is deeply connected with Zhongli's lore and background.

In Nantianmen, there is a huge tree that says to seal away a monster. That monster is Azhdaha. There will be a new Trounce Domain called "Beneath the Dragon-Queller" unlocked after finishing Zhongli's second story quest.

Requires Resin To Get Rewards

The difficulty of this fight will entirely depend on whether you have a shield. It is highly recommended that you bring characters that can make shields using their elemental skills.

Since Azhdaha's attacks can deal massive damage, it is best that you bring along a healer to protect your party if you lose your shields.

You can bring any character as your main DPS during the fight. However, since Azhdaha's element may change during the fight, it is best that you bring another DPS with a different element to consistently deal damage.

This party mainly relies on Zhongli and Hu Tao to deal damage while utilizing the shield and Xingqiu's element. You can use Bennett to recover HP and increase your survivability.

Noelle will be the main damage dealer and the shields she provides will help you out against surviving against Azhdaha's attacks..

Move Away From Rings On Floor

When you find yourself inside a lighted ring, immediately run out of it. This is an indication where a boulder will drop, dealing damage where it lands.

Run Away From Azhdaha When It's Underground

Distance Yourself From Spines

The spines that Azhdaha releases will continuously pulse with geo energy. Stay far from them as they will each explode after a few seconds!

Be ready to dodge the shock Waves released by Azhdaha when it does its slam. It will be one after the other so either run far from it, or ensure you have a shield to absorb the damage.

Have A Shield When Azhdaha Absorbs An Element

Whichever element it absorbs, Azhdaha will deal tons of damage if your character is unshielded. Make sure to have a your shield ready to apply when fighting it at this stage. Players hit

Azhdaha is able to switch between four elements during the fight. Look out for this and avoid using the same element as Azhdaha to maximize your damage output.

Form teams With Other Players

Boss Rewards Can NOT Be Shared

The rewards may follows the same pattern as other bosses,which will not be sharable and can only be claimed via use of resin.

Claiming the rewards from new boss would likely cost 40 ~ 60 resins if it follows the same pattern as other bosses.

* Any archer + healer + 2x fire for resonance * I used shield user instead of healer. But this information was amazing !. 100% guaranteed; didnt need any revives, food or item buffs !

Any archer + healer + 2x fire for resonance. Run far, strafe while moving to the side. Run when he shoots, run when he sinks. Eat stamina food. Avoid standing in front of him. Avoid being close.

Yeah let's use geo characters as damage dealers, the boss has not at all 70% res against geo