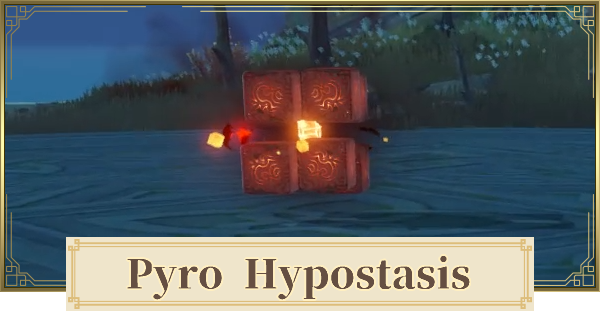 Pyro Hypostasis is a new world boss that players can fight for materials, artifacts, and other items. Similar to other Hypostasis, it has the same cube-look, but with a orange-red coloring to fit its Pyro element!

Released In The 2.0 Update

The Pyro Hypostasis was released as part of the 2.0 Update. Players can start fighting it once they have upgraded into the latest version and travel to Inazuma.

Pyro Hypostasis - Location & How To Unlock

Players will not get access to Inazuma until they progress through Archon Chapter 2 Act 1. You can't just waltz in Inazuma without doing the quests first.

Could Include Yoimiya Ascension Materials

Having a Hydro user as the main DPS for your team against the Pyro Hypostasis is a must. This will make it easier to break its Pyro infusion, while also being able to deal higher damage against it with vaporize.

The Pyro Hypostasis hits hard and unless you can dodge its attacks perfectly, you will need a shield to buffer the damage. Zhongli is perfect for this since he has one of the best shield elemental skills in the game.

You can easily shred through the Pyro Hypostasis' infusion and its health by using Xingqiu ult and triggering it using Barbara's normal attack! Once the pyro infusion is gone, you can switch to Kaeya for melt.

Break Tinders To Prevent It From Reigniting

Tinders will appear close to the Pyro Hypostasis to reignite it. Simply destroy them each time they appear and you will get this achievement. You don't need to destroy all of them. Even just 2 destroyed will stop it from reigniting.

Pyro Hypostasis - How To Beat & Weaknesses

The Pyro Hypostasis will not receive direct damage to its health while its Pyro infusion is up. Snuff out its flame by using a Hydro character to attack it!

Can Attack Its Square Form

When the Pyro Hypostasis is ignited, you don't need to wait for its crystal center to show up. You can attack its square form directly to remove the Pyro infusion.

Extinguish Tinders To Stop It From Reigniting

After its Pyro infusion is removed, the Pyro Hypostasis will eventually try to reignite itself with Tinders. Destroy them to stop its from reigniting and regaining health.

When the Pyro Hypostasis charges forward in its bull form, it will start a chain of attack. It will dive in its fish form then explode in a swarm of butterflies. Dodge this by running to the side.

Ball Form Will Keep Going After You

During its Ball Form, the Pyro Hypostasis will chase after you! It can change directions so it's best to dodge at the last second before it could hit you.

One of the long-range moves of the Pyro Hypostasis, its snake form will throw fireballs in your direction. It's pretty easy to dodge if you go either forward or backward.

When the Pyro Hypostasis becomes a hand, it will pound the ground and multiple pulses of Pyro will explode from the ground. You can dodge this by going inside the first ring.

Co-Op With Other Players!

Check out the forum linked below to have a chance to meet and play with other Genshin Impact players. Remember to also post you UID & Server so other players can add you.