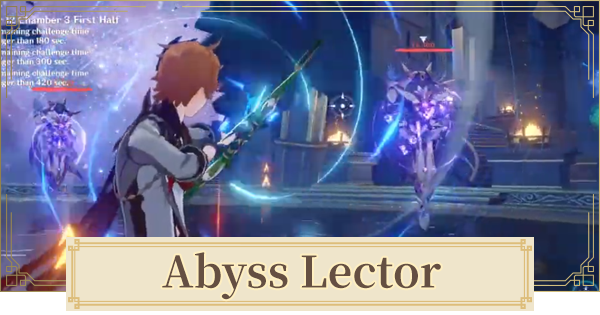 Genshin Impact
Abyss Lector - How To Break Shield & How To Defeat

Abyss Lector is a boss enemy to be released in Genshin Impact. Find how to beat Abyss Lector, element, skills, abilities, story details and the location.

How To Destroy Shields

Characters with shield are also recommended as they will protect you for the constant charge damage released by the Abyss Lector.

Use A Crowd Control Character

A character with a crowd control skill is also recommended. This skill will give you time to easily gather both and freeze them while giving constant damage.

If you get closer to the Abyss lector it will strike you with an electro lightning that will cause a massive hit damage to your character.

It summons waves of electro orbs that causes damage and also an electro status that will drain your character's energy upon touching the orb.

Based on the reveal trailer, the Abyss Lector will embodied something like cosmic with electro attack to suppress enemies. It could either be a domain or a story boss.

Seems like the Abyss Lector will have the power to lengthen CD of enemies that is also a similar effect to the Slowing Water. In relation to this, is the Electro Leyline effect drains energy for burst.

The Abyss Lector has been officially released in the 1.5 Updated. This new boss was currently included on the Spiral Abyss as one of the enemies to defeat.

Check back for more updates regarding this new boss and the release update for its story, domain and more!

Check Out The 1.5 Update Details

Similar to Abyss Herald, Abyss Lector might also be a story-only boss. Since the area shown in the trailer is closed, it could also be a domain boss.

the Abyss Lector employs Electro in its attack. It looks to be similar to a catalyst character with the way it attacks. Although, there's no guarantee that will also be Electro and have the same weakness and strengths.

Is this the missing enemy in my archive? I can't seem to get past 12-2 second half so its really annoying.