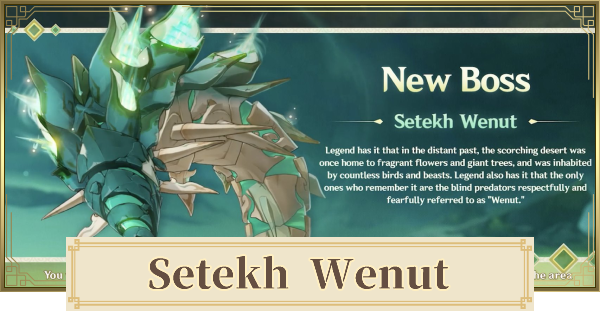 Can Be Found At Desert Of Hadramaveth

Setekh Wenut is a new world boss that can be found in the Desert of Hadramaveth. From the teleporter shown above, head to the cliff and dive down and you will find Setekj Wenut right below you.

This boss respawns likely after 3 minutes. To collect drops efficiently, beat the boss and teleport away then wait for a minute or so.

Recommended To Bring Characters That Can Hit Aerial Targets

Since your goal is to hit the Setekh Wenut's Wind Bite pellets, it's recommended that you bring a character that can hit aerial targets. This isn't exclusive to Bow characters since character likes Xingqiu, Yae Miko, or even Klee have skills that can do this.

To destroy a Pellet, you need to Swirl it with an element. Geo and Dendro are not affected by Swirl and are unable to destroy Wind Bite Pellets.

This list includes characters that uses at least one of the drops from this enemy.