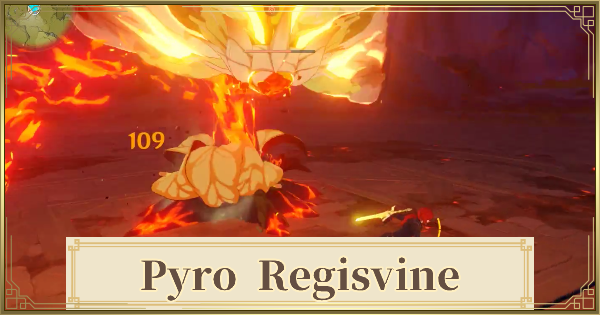 Teleport To They Waypoint Near Cuijue Slope & Luhua Pool

Teleport to the waypoint near Cuijue Slope & Luhua Pool. Afterwards, climb down the cliff south the waypoint and follow the path towards the cave to fight the Pyro Regisvine.

Use Barbara To Down The Boss

Hydro characters like Barbara can easily destroy the flame orb near the boss' roots. Destroying them would make render the boss unmovable for a few seconds so take advantage of this chance to DPS using the traveler.

When the character attack the boss with geo element and trigger crystallization, obtaining that crystal would give a shield. When you are shielded, your attack DMG will increase because of Geo Resonance.

Hitting the boss using Kaeya's Elemental skill or burst will most likely trigger Melt because of Cryo attack reacting to Pyro body of the boss. Make use of this for higher damage.

Check Out All Free Characters Here!

Hydro resonance will help you decrease the damage given by Pyro Regisvine. Boosted healing and Barbara's elemental skill and burst creates a party that is difficult to put down.

Electro resonance makes it a lot easier to obtain energy that is used to cast elemental burst. Make use of this for constant huge damage to the boss.

Summon Oz And Attack With Mona For Range

There are times wherein the boss will make it impossible getting close to it without receiving constant pyro damage. On those times, summon Oz using Fishchl and continue attacking using Mona.

Destroy The Flame Orbs To Down The Boss

Focus on attacking the flame orb when it appears. Using Hydro-infused attack would reduce the HP of it faster.

Switch To Your DPS When Its Down

When the boss is down, switch to the character that deals the most damage and attack the boss as many times as you can. Triggering elemental reactions is also recommended.

Do Not Move Too Faraway From The Boss

Most of the attack of the boss are more difficult to dodge when you are far from it. Try staying within damaging range and quickly go back when you move away because you dodge an attack.

The boss will face up and summon a series of fire pillars all over the field. Before the fire pillar appear, a circle of fire will appear on the ground. It will explode almost immediately so dash away from the area. It is also recommended to stay close to the boss so that the attack does not reach you.

The boss would headbutt the ground releasing waves of flame in the direction where he attacked. Sprint to other direction to dodge. When you are faraway from the boss, it is easier to sprint towards the flame wave the before the wave hit you to dodge.

The boss will shoot fireballs towards you dealing small damage that inflicts Pyro element. Sprint away from the fireball's direction to dodge.

The boss will summon several fireballs slowly moving towards you. This attack most of the time overlaps with the fireball attack of the boss. Sprint or walk around the boss to dodge.

The boss will spit a huge ball of fire that would become a flowerbud. That flower bud will explode, leaving the floor covered in fire, after awhile so stay away from it as much as possible.

The boss will swipe his head on the floor dealing pyro damage within his vicinity. Move away from the boss once it started to bend to avoid damage.

The boss will spin its petals around creating a vortex of flame and will smash it in the ground leaving the floor filled with flames. The moment the boss started spinning, sprint away to avoid huge damage. While the floor is filled with flames, do not stay close but instead focus on damaging using range characters.