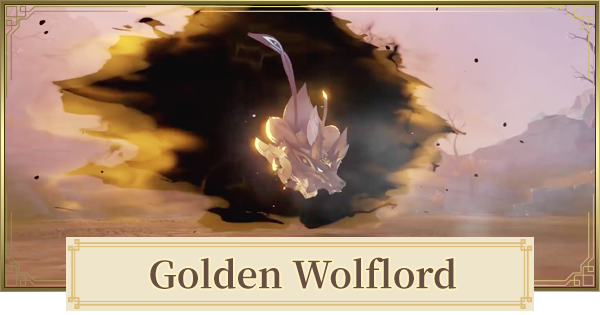 Lord Of The Rifthounds

The Golden Wolflord is the leader of the Rifthounds, capable of calling for its breathren from different dimensions. It's an invader of worlds intent to prove its worth and has chosen Teyvat as its next target.

Golden Wolflord - How To Unlock & Location

How To Unlock Golden Wolflord

To be able to battle the Golden Wolflord, you must first unlock Tsurumi. This will require progressing through the Inazuma Archon quests.

Located in Tsurumi Island. The exact location of the Golden Wolflord will be added once it is officially released, so check back again to get more updates!

Like any other world boss, Players will have to use Resin in order to collect rewards from beating the Golden Wolflord. You can clear this boss as many times as you want in a day, but each reward collection will require 40 Resin.

Character That Will Use Materials From Golden Wolflord

Speculated that one of Arataki Itto ascension materials will be coming from the drops of the Golden Wolflord, which is called Riftborn Regalia.

Must Have A Geo Character

Since only Geo attacks can destroy the Rifthound Skulls and the Golden Wolflord's shield, it's a must to have a Geo character on your team. Ningguang in particular works best for it.

Have A Healer On Your Team

The Golden Wolflord can easily apply Corrosion and bring down the health of your team even if they're not the active character. Having a healer will ensure you have a better chance of survival.

Ningguang and Albedo can easily work together to deal high damage against the Golden Wolflord. As a Catalyst, Ningguang can attack it even when it's up in the air. Jean and Bennett can easily heal the team when they're plagued by Corrosion.

Lisa's Burst applies DEF down to an enemy, which you can take advantage off once you break its shield and it's down. Ningguang and Noelle will be your main damage dealers with Barbara as your support.

Switch Between Characters When Affected By Corrosion

When your team is affected by Corrosion, make sure to switch between your characters. This will put less burden on your active character and even out the damage in your team.

The Geo Laser can easily be dodged by either going to the tail area of the Golden Wolflord or using your invincibility frame to get past it. It has a long range so it can't be outrun if it's aimed right at you.

The skulls are pretty easy to dodge. Just make sure to dash at the last second before they hit you so they would hit the ground instead.

The only thing you can do with the Geo Tornado is to run. Ideally, circle the arena so it won't catch up to you quickly. Having a high amount of Stamina is ideal here.

The Ground Sweep can be dodged by staying on the other side of the Golden Wolflord. At the end of it's attack, it will do a sweep that can reach you if you don't continue running.

Stay in areas where the Geo markers are not present to dodge this attack. There should be small areas between the meteors for you to stay safe in.

The Wide Blast has a big enough range to cover the whole Arena. Stay at the sides to escape from it!

you dont have to have a geo character to defeat the rifthound skulls, although they work much better, just elemental attacks (catalysts) but it would take a lot longer without geo

Are there any achievements associated with this boss? Cause so far, every boss has always had 2, if I'm not wrong.