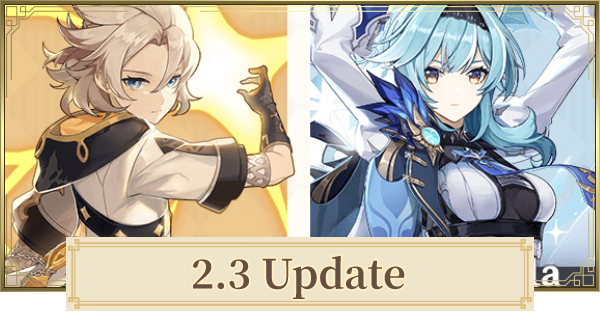 For the first time, Genshin Impact will host 2 rerun banners simulatenously! It's still unknown when Eula's and Albedo's Rerun Banners will run, but it's guaranteed that they will have the same duration.

It's been confirmed that the the rerun banners between Eula and Albedo will share Pity and pull count. However, this only appliers to their banners. The Weapon Banner & Standard Banner will remain independent in their Pity & pull counts.

After a lot of rerun banners, we're finally getting a banner with new characters! Two new Geo characters, Arataki Itto and Gorou, will be featured as banner characters.

Coming from the rift, the Golden Wolflord is a massive Geo Rifthound that towers over all of the characters. Besides its powerful Geo attacks, it also applies Corrosion to characters hit by its claws.

There will be no new areas that will be added as part of the 2.3 Update. A new Domain, however, will be added. Slumbering Court is located in Seirai Island and will host the 2 new artifact sets.

Get a chance to try out characters as you fight your way through an eerie dungeon during the Misty Dungeon Battlefront event! The event has been previously released and will have its rerun in the 2.3 update.

Players can expect to be able to try new characters and dungeons in this Misty Dungeon rerun! Although the specific characters are not yet shown, it should be a mix of 5-star and 4-star characters.

Train your the body in the harsh Dragonspine environment and why not make some Snowmen while you're at it? Join Eula, Amber, and Albedo as part of this new event!

From combat training to simply building a snowman, Dust and Shadowed Snow is a promise of fun challenges in the ice. There will be three total minigames including Tracker Training, Combat Training, and Building a Snowman.

A rumored new event where players will get a chance to interact and even capture animals from the Inazuma region. You will need to be sneaky to get a jump on them!

Will Include New Gadget: Omni-Ubiquity Net

The only way to capture the animals during the event is with the use of the Omni-Ubiquity Net! This new gadget will allow you to capture animals and even place them in your teapot after.

The Energy Amplifier event makes its return in the 2.3 update. During its last run, players can earn a free Diona so there's a chance of a free 4-star character this time around too.

The friendly traveling salesman Liben will make his comeback with the return of the Marvelous Merchandise event. Same as with its previous runs, exchange the required items of the day to get a box full of rewards.

Spend time with characters on a more personal level through Hangout Events! It's been confirmed that we will get to Hangout with Gorou and Beidou this time around!

Can Now Place Paimon In The Teapot

If you want to spend more time with Paimon than you already do, you can now place her inside the Serenitea Pot! She'll be part of the Companion System, though it wasn't shown if she will have her own favorite furniture sets.

Redhorn Stonethresher | How to Get & Is It Good?

Cinnabar Spindle How to Get & Is It Good?

The Husk Of Opulent Dreams is a new Geo-focused artifact that's fit for Defense-based Geo Characters. It should work well with characters like Albedo, Noelle, and Arataki Itto!

On the other hand, the Ocean-Hued Clams is a new artifact set made for healers! Unlike Maiden Beloved, Ocean-Hued Clams works in a way that it boosts healing and damage for characters that use it.

Both Will Be Included In New Seirai Island Domain

The two new artifacts can be farmed in a new domain to be added in Seirai Island. Just like other Artifact Domains, collecting rewards will require Resin.

Arataki Itto's Story Quest - Taurus Iracundus Chapter: Act I "Rise Up, Golden Soul" will also be available after the Version 2.3 Update. It will require 1 story key to unlock it.

The Omni-Ubiquity Net will allow players to capture animals around Teyvat! Once captured, you can then place them inside your Serenitea Pot.

Omni-Ubiquity Net Location & How To Get