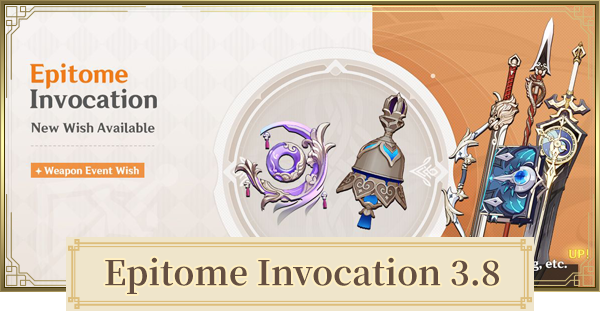 Genshin Impact
Epitome Invocation (Weapon Banner) 2.6 Banner & Is It Worth It?

Epitome Invocation is the weapon banner for Genshin Impact 2.6! Guide includes 5-star weapon skills, is it worth it or not, drop rate, gacha system, phase 2 and second half.

Should You Roll At Epitome Invocation?

Roll If You Want ★5 Weapon

A 5-star weapon has significantly higher stats than lower rarity weapons so roll this banner if you have enough characters already. However, the priority of weapons is lower than characters in the early game, so pull other banners if you don't have characters you want.

Mistsplitter Reforged will be a suitable sword weapon for the characters above as it conducts a good base attack damage and also increases the elemental damage bonus which makes them a good DPS.

The Unforged For Support

The Unforged is a good weapon for supporting characters. This claymore weapon will boost the character's shield and also provides an amazing damage boost towards the enemies.

Other Featured Weapon For Sub-DPS & Support

The selection of 4-star weapons in the banner are also good for another of Sub-DPS-built and support characters.

Guarantee Count Accumulates Only Within This Event

Note that guarantee count only accumulates within the weapon event wish. This means that number of times you roll Epitome Invocation does not count for other non-weapon banners or limited character banners.

Epitomized Path is a new feature that will allow you to chart a course and choose which of the two current 5-Star weapon on the banner you would like to get.

Does anyone know what the next weapon banner will be for kazuha?

is every weapon available on the banner? i need lion's roar but i'm not sure if it's limited time

When does the new weapons banner go live ?