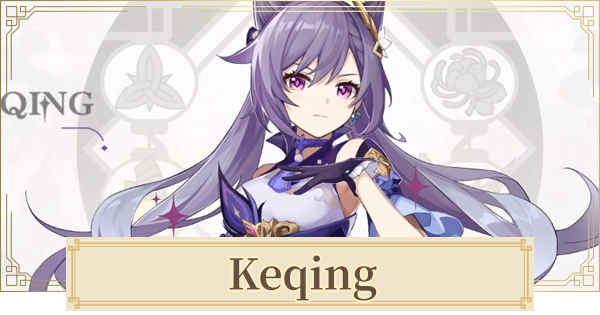 ▲Repeatable until you run out of stamina! Also serves the function of dodging enemy attacks.

Keqing's biggest strength is her ability to chain charged attacks, leaving almost no window to be interrupted! This makes her perfect for taking on larger, more lumbering enemies that tend to stay still!

Useful For Fighting And Movement

Keqing's Elemental Skill shoots out an Electro mark, and when you hit the ability again you can teleport to that mark's location and attack. If you fit this into your combo, you can use it to deal even further damage. There are even ways to use it when just exploring the map, making this a very versatile ability.

Keqing has a potential to be an attacker with her fast attacks and powerful charge attacks. She can also quickly inflict Electro to enemies easily making it easy to cause super-conduct enabling more Physical DMG.

Keqing can easily deal damage both with her physical and electro attacks. She's a mobile melee user that can zip through the battlefield with ease!

Hurls a Lightning Stiletto that annihilates her enemies like the swift thunder. When the Stiletto hits its target, it deals Electro DMG to enemies in a small AoE, and places a Stiletto Mark on the spot hit.

Hold to adjust the direction in which the Stiletto shall be thrown. Stilettos thrown by the Hold attack mode can be suspended in mid-air, allowing Keqing to jump to them when using Stellar Restoration a second time.

If Keqing uses Stellar Restoration again or uses a Charged Attack while its duration lasts, it will clear the Stiletto Mark and produce different effects. If she uses Stellar Restoration again, she will blink to the location of the Mark and unleash one slashing attack that deals AoE Electro DMG. When blinking to a Stiletto that was thrown from a Holding attack, Keqing can leap across obstructing terrain. If keqing uses a Charged Attack, she will ignite a series of thundering cuts at the Mark's location, dealing AoE Electro DMG.

Keqing unleashes the power of lightning, dealing Electro DMG in an AoE. She then blends into the shadow of her blade, striking a series of thunderclap-blows to nearby enemies simultaneously that deal multiple instances of Electro DMG. The final attack deals massive AoE Electro DMG.

Within 5s of recasting Stellar Restoration while a LIghtning Stiletto is present, Keqing's Normal and Charged attacks are converted to Electro DMG.

When dispatched on an expedition in Liyue, time consumed is reduced by 25%.

*LB＝Limit Breaking, which can be done by acquiring the same character.

How Tall Is Keqing?

There is no in-game and official data regarding the height of Keqing. We compared characters and Keqing is Medium comparatively.

Characters With Same Element and Weapon As Keqing

I used to have harbinger of dawn on her until I broke f2p. It’s really hard to maintain above 90% hp, which is its only issue. I have the black sword on her now and it is very good for her! I use 2pc thundering fury and 2pc gladiators finale.

Whoever wrote this guide doesn’t know what they’re doing and doesn’t know how she works. I use The Black Sword and Thundering Fury and she does a ton of damage. She was SS Rank and now just S Rank? No. This ranking system ****s.

The black sword is a great recommendation especially once you level it up. I love how it heals her as she fights. One thing I didn't like was the thundersoother set. I use thundering fury and noblesse oblige and I think those work better on her.

Oof, whoever wrote this guide doesn't know how Keqing works at all. Poor artifact and weapon recommendations, deceptively ignorant rating.